Patricia H. Snyder Concert and Lecture Series - Policing in America: The Changing Landscape of Our Cities & Law Enforcement’s Role in Protecting Our Communities 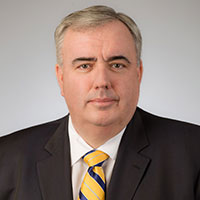 Ed Davis is the Former Police Commissioner of the Boston Police Department and current President and CEO of the business strategy and security agency, Edward Davis LLC. Commissioner Davis was at the forefront of the emergency response to the 2013 Boston Marathon Bombing and the arrests that followed. His experience during the Boston Marathon bombings will be depicted in the upcoming feature film, Patriots Day, starring John Goodman as Commissioner Davis, scheduled to release January 2017.

Commissioner Davis has built a stellar reputation on his diverse experience in interagency collaboration and law enforcement on local, state, national, and international levels. His keen insight in cyber security and anti-terrorism, as well as his expert knowledge in crisis management and strategic planning translates across industries. Commissioner Davis’ unique approaches to terrorism, cyber security, and policing have been adopted both nationally and internationally in Singapore, London, Northern Ireland, Jordan, and Israel.