As a co-winner in the 2016 Vukovich Concerto, Alexandra Billhartz, was awarded the opportunity to perform with the University of Evansville Symphony Orchestra in the spring following graduation. Billhartz counts this solo performance as one of the proudest moments of her career thus far. Starting voice lessons in the fifth grade, Billhartz has always enjoyed singing when opportunities presented. During one Christmas Eve concert singing as a hobby turned to a passion as she heard Christine Brewer, an opera singer, perform “O Holy Night.” After hearing the performance and meeting Brewer afterwards, Billhartz knew that she was going to seek a career in vocal performance.

Where better to start that career than at the University of Evansville? Billhartz feels that UE greatly prepared her for her graduate career, which she is currently pursing at Ball State University. As a part of the University of Evansville Opera Program, Billhartz was able to learn several full operatic roles before graduation as gained a deeper understanding of her craft. In fact, this love of studying the art of opera continued in to the beginning of her graduate work at Central Michigan University where her literature review on opera adaptation was selected for a research poster presentation at the 2017 Michigan Music Conference.

Billhartz reflects fondly on her time as a music student at the University of Evansville. One of her favorite parts of attending UE was the strong sense of community both within the department of music and across the campus in general. She felt that the University of Evansville gave her a home away from home during her undergraduate career. Aside from being involved in the Honors Program, a member of the Sigma Alpha Iota Women's Music Fraternity and a Ruby Sword of Honor recipient, and a cantor at Neu Chapel, Billhartz loved the city itself. From the Fall Festival on the West Side of town, to exploring downtown, to walking by the riverfront Billhartz viewed Evansville as an exciting and welcoming new place to call home. 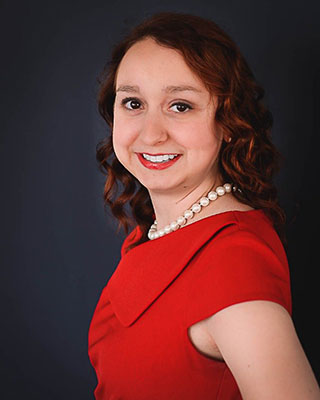