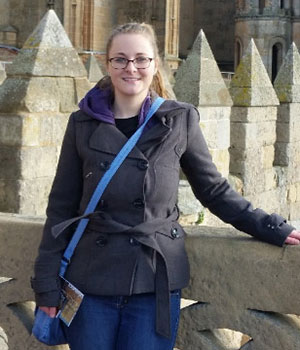 While in Spain, I have had the opportunity to volunteer at a school that teaches English as a second language to learners of all ages. I volunteer in an adult classroom, so I not only get the chance to practice my Spanish while explaining English grammar concepts, I also get to see English framed in a whole new way. The adults in my class are all so sweet, and I really enjoy being able to help them with their English.

That’s a tough one. I love going out for tapas in the Plaza Mayor and ordering “patatas bravas,” my favorite dish. I love strolling down the river walk by the Río Tormes and living in a city that has so much history. I LOVE speaking in Spanish every day. "No pasa nada" is a simple phrase that I have come to love using. It just means "it's okay" or “it’s fine” but I think it captures the spirit of the Spanish lifestyle - tranquilo, don't worry about it! Having the opportunity to practice Spanish in my own home in Spain is fantastic. Living with a host family is one of the best decisions I made. My señora is an absolute sweetheart, and she helps us any time we stumble in our Spanish.

While I would have to say that the Scottish highlands and my trip to Africa are probably at the top of my list, one of my favorite memories happened in Tenerife, one of the Canary Islands in Spain. We had rented a car to drive up through the mountains and reach El Teide, an active volcano standing as the tallest point in the country. Google mapped out the fastest possible route for us – unfortunately, that meant it was also the steepest. We had packed all our luggage in a tiny European car and jammed 5 people in it as well (I was smooshed up against the window). After driving for five minutes or so, we reached one the steepest and narrowest roads I have ever seen. The climb resulted in smoke pouring out of the engine and us jumping out of the car. As we were stuck in the middle of the road, another car stopped beside us. As a couple stepped out of the car, we thought they were coming to yell at us for blocking the roadway. Instead, they went out of their way to help us out. Tenerife locals, they not only looked at our engine to make sure it was safe to drive, they led us back down the hill and we followed them to a smoother way up the mountain. This was one of the kindest gestures I had experienced in Spain and a great spontaneous interaction with locals. I even learned a few words about engines in Spanish that I never thought I would need to know!

I will miss Nora, my señora’s two-year-old granddaughter! Having a child in our homestay is a great opportunity for me to practice Spanish. Most days when I arrive home I hear an "¡Hola Jenny!" yelled from the kitchen followed by “¿Qué estás haciendo? (What are you doing). Sometimes I walk into my room and find Nora just sitting on the bed, waiting for my roommate and me. Our host father is actually Italian, so Nora understands and speaks phrases in both Spanish and Italian. Not only that, she managed to learn three color names and the numbers 1-10 in English at only two years old! Nora being bilingual with English phrases to boot is certainly good motivation to persevere in learning a second language.

Of course, getting more comfortable with the language was a process. There are always ups and downs in language acquisition, and I definitely had those days where I simply could not communicate in Spanish the way I wanted to. Beyond that, adapting to the Spanish way of life definitely took some time. Spaniards take their time in a way that most Americans do not. People walk slowly, eat their food slowly, and don’t worry about being in a rush (which often means they are late!). At first, this was hard to get used to. I like to be punctual and quick about things. However, as the semester progressed, I found that I enjoyed living with a slower rhythm. I got the chance to have long conversations with my señora during meals, even between classes. Taking leisurely strolls allowed me to see little details in the city that I had never seen before. In addition, Spaniards are not as overly polite about things. “Please” and “thank you” and “sorry” are used less. At first, I thought this was rude! But as I came to find out, Spaniards typically only use these words when they truly mean them. Navigating the subtle differences like this between cultures was a challenge (I made plenty of mistakes), but it ultimately gave me more insight into both Spanish and American culture.

Speak as much of the target language that you can! Find friends from the country in which you are living. If you have American friends with you in your program, find ones that will speak the language with you and/or that enrich your time abroad (there will undoubtedly be people that do not care to make an effort to learn about the culture or the language). Don't be afraid to make mistakes, whether they are in a different language or culturally. I found that most of the time people appreciate your effort to assimilate into another culture, regardless of a mistake you might make. Lastly, relax and enjoy your time abroad. The most valuable experiences you will have will be in your actual interactions with the host culture (going out for drinks, meeting up with friends, making those mistakes). Expect an adjustment period, and let yourself go through it. There will be days where you feel sad or like you will never feel at home. However, by the end, you'll probably be wondering how you’ll ever leave. Take it all in and have a wonderful time.

If you have the chance to study abroad, do it! You will not only learn about a foreign culture and a whole new way of life, you will gain a sense of perspective and humility within yourself. There are things about Spanish culture that I will continue to keep as part of my lifestyle back here in the United States, and I think I have grown as a person because of those things. Traveling and being able to function in a culture with a different language really gives me a lot of confidence. Living away from everything and everyone I had previously known is a shock, but knowing that I can do something like that with relative success is a great feeling. I feel like I am willing to explore things now that I would not have considered before, and I owe that to this experience.