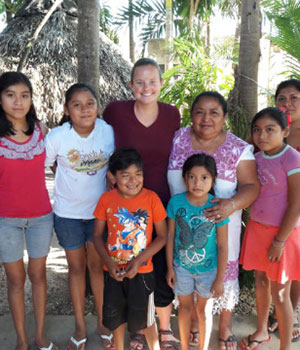 I can’t think of one experience that stands out as being particularly rewarding, but my entire experience abroad taught me a lot about myself and the world, and that has been fulfilling. It’s amazing to think that I was able to live somewhere while communicating only in Spanish, and I even built friendships with people in a different language. The fact that I was able to travel by myself, figure things out when I encountered problems and ask for help when needed, and enjoy and appreciate a new culture are all things that made my time in Mérida incredibly rewarding.

It was so easy and fun to get around Merida and the surrounding cities with the wide variety of public transportation options. You could always walk somewhere, but if you were going further or wanted a little bit of adventure you could take a combi (a van that serves as a group taxi and somehow fits more people in it than is physically possible), a mototaxi (an open-air cart that is attached to a motorcycle), a bus, a regular taxi, or a colectivo (group taxi to surrounding cities). I loved catching the bus every day on the way to and from work and seeing the city pass by during the 20-minute ride to the hospital. I didn’t even miss my car while I was there!

I went with my program to a Mayan village called Tinum, which is about two hours from the city of Mérida. During the two days we spent there, we explored different sites that are characteristic of Mayan culture. We visited a milpa (corn field) and learned about harvesting, which is essential for providing families with food to eat. We went to a local molino (corn mill) and learned about processing the harvested corn to make dough for tortillas. One of my favorite excursions was visiting the town’s panadería (bakery), which had the most delicious bread I have ever tasted! I was paired with a host family from the village during my stay there. My host had five young grandchildren, and I loved playing games with them all afternoon (games such as hide and seek, tag, and some others which were new to me.) I helped (or at least attempted to!) prepare meals by making corn tortillas from the dough and cooking them over the fire, I took bucket baths for showers, and I slept in a hammock at night (while warding off a scorpion!) It was an incredible and unforgettable experience. While the Mayan village lifestyle feels like a completely different world, I loved learning about it and experiencing it by staying with the locals, and I was touched by the love and hospitality of my host family.

I miss everything about Merida—the language, the warm weather, the beach, the cenotes, the public transportation, and the food! However, out of everything I experienced while I was there, I will definitely miss the people the most. It’s one thing to visit a new place for a vacation. You see a lot of cool sites, and you miss the experiences you had. But when you stay somewhere for a longer period of time, it’s even harder to leave because you build relationships with the people around you. I became very close with my host family, many of my coworkers at the hospital, the other students from my program, and some of the people I met at the church I attended while I was there. More than the city or the culture, I will miss my friends the most.

The bathrooms! Everywhere you go (whether a public place or private home), you are not allowed to put anything in the toilets—toilet paper included! This alone isn’t too bad, and you get used to it after a while. However, the bathrooms in general are a lot less reliable than what I’m used to. At the hospital where I completed my clinical, it was a challenge to find a bathroom that had both toilet paper and running water to wash my hands. I learned how to make do with using paper towels and packing along hand sanitizer, and I became an expert at squatting, since none of the toilets actually had seats!

On a more serious level, working in a Mexican hospital was incredibly challenging in every way imaginable. It was challenging to communicate because of the language difference (and because everyone talks super fast!), which became easier as time went on and my Spanish skills improved. It was hard to adapt to the differences in hospital standards between Mexico and the USA, and to understand the health care practices and norms. I saw patients with insane illnesses and conditions, some of which I had never even heard of, so on an academic level it was also a challenge to figure out the best way to treat these patients. I worked from 7:00 a.m. until 3:00 p.m. every day, so it was physically exhausting and mentally draining. On an emotional level, it was also challenging to see so many patients with such desperate circumstances. Many come from pueblos several hours away because this is the only hospital that will accept them. Since their family members can’t go back to the pueblo and return to visit them the next day, they stay outside on the benches or stairs near the entrance to the hospital. Families leave behind children and others to accompany their loved ones to the hospital, and many have so few resources to receive the care they need. In every realm, this experience was a challenge, but I would not trade it for anything.

Keep a positive attitude in every situation. It’s easy to become frustrated when you feel like you’re failing or when things don’t go as planned. But if you try to stay positive, keep working through it, and even try to find humor in frustrations, you will enjoy the experience a lot more and will be able to look back and laugh at the crazy things that happened and everything that went wrong while you were there. It’s all part of the experience!

Stay humble. Even if you feel like you know a better way to do things or if you disagree with someone’s point of view, remember that you are a guest in their culture. You are also representing our country, so keep a good attitude and be respectful, no matter what. If you honestly listen to people and try to understand where they’re coming from, you will end up learning a lot, even if you don’t necessarily agree with them.

My last weekend in Mérida was unforgettable! One day, I travelled with a friend to Cuzamá, a town about an hour from Mérida, and we visited the cenotes there. These are natural fresh-water wells often in caves and underground. We took a cart that is pulled by a horse along a train track to get to each of the three cenotes (which was a rough and bumpy ride!), and we had to climb down ladders and tree roots to get into the cenotes. They were so beautiful, and it was such an adventure to find them and swim in them.

The next day, we went to Carnaval, probably the biggest festival of the year. Once we finally found the bus that took us to the pueblo where the festival was being held, we watched the Carnaval parade and enjoyed so much traditional food sold by street vendors and food carts. There were so many people and we were probably the only foreigners! It was amazing to be a part of a festival that is so important in Mexico.