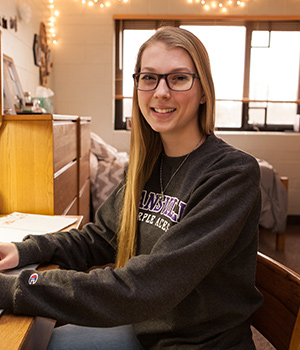 A High School Competition Leads to a Game-Changing Experience

As an Evansville native, Michaela Kunkler always knew she wanted to go to UE for her college education.

Naturally, she entered the High School Changemaker Challenge with some of her classmates. Their big idea? An anti-bullying board game geared toward kids in grade school. Inspired by widespread stories of school bullying, she built the game to teach students that they have the power to combat bullying with empathy, courage, and leadership.

The team won first place in the competition, and with it, four-years’ free tuition. This “sealed the deal” for Kunkler becoming an Ace, and her changemaking journey took flight.

Bringing the Game to Life

After developing a prototype for the high school competition, Kunkler knew that the game had serious potential.

She took it to the next level in the spring semester of her freshman year, where she built upon her first prototype in a ChangeLab course with two other classmates. The team focused on breaking apart the game and improving it.

The game continued to grow during Kunkler's sophomore year when UE professor Dr. Richard Maass began to supervise the project. Dr. Maass is associate professor of political science and he has some background in board game creation. Along with Dr. Maass and other students, Kunkler looked at the elements of gameplay, and researched bullying and ways to combat it. They were even able to test the gameplay with students from Delaware Elementary School.

By the end of Kunkler’s sophomore year, the game was reaching its final stages. It transformed from a simple competitive game where players just move their pieces through a path to the end into a collaborative play game with a variety of strategies that enhance the fun and learning aspects of the game. Since then, Dr. Maass has taken the game to board game conventions and is seeding interest with publishers.

Winning Teamwork and a Sense of Accomplishment

Balancing the project, a shifting team, and her own schoolwork, Kunkler has learned a lot from her experience.

“As the member who has been with the project from the start, I’ve had to learn to deal with switching up teammates every semester or so. Each experience — as any group project does — has its ups and downs, but it was through coming together as a team that everyone was able to lend a helping hand to this awesome project!”

She has been able to bring her experience from working on the board game to other projects at UE, including her position as a graphic designer for Embrace Marketing and Communications, a student-run agency that serves clients in the community. Students in this agency receive credit for a ChangeLab course while they earn money providing marketing and communications services to businesses and nonprofits.

“I have learned to take my experience from one ChangeLab project and develop it to help me with another. Teamwork, communication, trial and error, and creativity-stretching challenges are all aspects that I have had to focus on in both projects.”

Winning that prize in high school set Kunkler on the course of changemaking forever. She has grown as a leader and cultivated her drive to make a difference.

“It is because of the changemaking hearts and souls at UE that I am able to be there and call myself a Purple Ace...I’m so thankful to have been given this opportunity to make a change right from my classroom. I think it’s a unique experience that more students should take part in.”