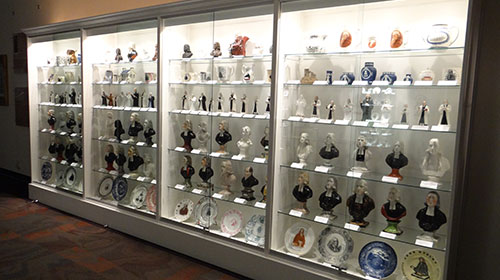 The John Wesley Commemorative Collection was given to the University of Evansville, a United Methodist-related school, by UE professor emeritus of philosophy and religion, Dr. R. Wayne Perkins and his wife, Sally. Sally earned a master's degree from UE in 1977. The 300 piece collection – which includes paintings, prints, ceramics, plates, silverware, busts of Wesley and more – are gifts to the University from the Perkins family.

The collection is believed to be the world's second largest private collection of items related to John Wesley and Methodism. Nearly all of the commemoratives were acquired in England; most are between 100 and 250 years old, with the oldest dating back to 1765.

One of the unique pieces is a ceramic bank created in the form of a Wesleyan Chapel money box and dating back to 1845. Another one-of-a-kind piece is a wooden walking stick with a bust of Wesley on its handle. Wayne and Sally spent more than 35 years searching for it.

In the words of Wayne Perkins, John Wesley was a Renaissance man. He was a scholar, priest and educator. He was multi-lingual and also studied science and medicine. His hallmark, according to Perkins, “was his ministry to the sick and poor.” He established Sunday schools so street children could learn to read. He helped educate more than 200,000 children, who used a guide written by Wesley. The Gallery was dedicated on Founders Day, February 2012.