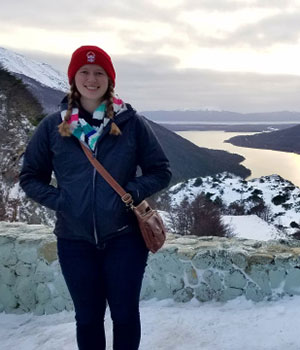 My ability to interact with locals in Spanish when I couldn’t otherwise has been a very rewarding experience. Starting a conversation with a total stranger and to be able to carry on that conversation for a while really improved my confidence in speaking Spanish. I now know that I have the ability to communicate effectively in my second language, and am sure I will feel less self-conscious about doing so back in the United States.

I really like how welcoming the Argentine people are; from day one Argentina felt like home. Many traditions in Argentina are centered on sharing food and time with your friends and family. For instance, the Argentine people share mate, a traditional yerba-based drink with one another as a way to spend time with those they care about. Also, traditional Argentine barbecue meals are shared amongst a group of people with the meat in the center of the table.

I really enjoyed my trip to Ushuaia, Tierra del Fuego. They call it “El fin del mundo” or “The end of the world” because it is the southernmost city in South America, and the world. Since Argentina is in the southern hemisphere, the seasons are opposite of the northern hemisphere so it was winter when I was spending my summer in Argentina. We were surrounded by the Andes Mountains down in the valley giving us a spectacular sight of snow-capped peaks wherever we looked. We went on a cruise down the Beagle Channel where we saw native wildlife, including sea lions! We also went dog sledding, climbed a mountain with snowshoes, and went on a 4x4 excursion into the mountains to see panoramic views of the mountains. It was insane to think that I was so far from home and had the opportunity of a lifetime to visit such an iconic city.

Alfajores, I miss alfajores so much! They are traditional Latin-American desserts where two sugar cookie type things have sandwiched in between them dulce de leche and are covered in chocolate. I ate so many of them over there! Also, I’m really going to miss my favorite restaurant in Buenos Aires, La Fabrica del Taco where I swear I’ve had the best combination of quesadillas and margaritas of my life. I was in Buenos Aires for 7 weeks and I believe I ate there 8 times! The empanadas there were also to die for, and you just couldn’t beat their price of 11 pesos! Oh, and I can’t forget about the dulce de leche lattes from Havanna, those were absolutely delicious, they gave PSL’s a run for their money! So, I guess what you can get from this is that I loved the food in Argentina, and I’ll miss it terribly.

Adapting to certain cultural differences has been one of the challenges that I have experienced. For instance, when one Argentine person greets someone whom they know, they give them a kiss on the cheek. This is something only occasionally done in the United States amongst relatives or significant others, but a commonplace in Argentina. I had to learn to anticipate that sort of a greeting in order to not seem repulsed by the gesture. Also gaining a new sort of independence has been different than what I experienced when I studied at Harlaxton, because I went into this experience without knowing anyone and I had to rely on my own Spanish and travel skills to navigate through Argentina. I am also a very extroverted and social person, so I had to learn how to entertain myself sometimes which was certainly a big adjustment for me.

It does not matter where you study abroad, as long as the program offers what it is you would like out of a study abroad experience. Do things that push your comfort zone boundaries just a little further every day. This is the only way that you will grow positively from your study abroad experience. Seize every opportunity that you can, whether it’s a cultural activity or a night out, you never know what you may find that you will like. Don’t stress about money too much during your study abroad experience. Budget out what you can afford before you go so you don’t become that person who always is complaining that they don’t have any money and won’t be able to afford certain things. There are plenty of free and inexpensive things for you to do wherever you are, so just appreciate that you get to spend time in another country.