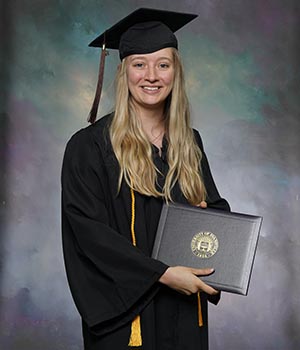 Hollie Hoffman graduated in 2022 with a BFA in creative writing and a minor in Spanish. After graduating, Hollie plans on finding a job in the Evansville area before possibly going on to earn a master’s or doctorate degree. When asked why she chose UE, Hollie responded, “After visiting the campus and sitting in on a writing class, I knew that UE would offer a fun and unique community for me to fit in to."

Hollie didn’t always know that she wanted to earn a creative writing degree. “I went from growing up wanting to be a veterinarian to realizing I wouldn’t be able to handle the stress of having an animal’s life in my hands,” she recalled. “Then, after I tossed around 50 other possible professions, I realized that my whole life I had been writing stories. That's what I loved most.” While Hollie’s decision was met with some resistance, her grandma (Ma) supported her. “Everyone was saying that it was a useless degree that wouldn’t earn me any money, but Ma told me to do what I love and find a way to make it work.”

In addition to her coursework, Hollie has been involved in several organizations on campus. She was programming chair for her residence hall during her sophomore year. She is particularly proud to have organized several campus-wide events during her time in this position. She also worked with The Evansville Review, participated in Student Government Association, and was a member of Sigma Tau Delta, which is an international English honor society.

Hollie’s favorite class at UE was Intro to Creative Writing with Dr. Lisa Nikolidakis, Associate professor of creative writing at the University. “It was the perfect introduction to all the writing classes I would receive during my time at UE. We got to work with fiction, nonfiction, poetry, and playwriting. Dr. Nik made it a lot of fun, and I was able to perform a fun 10-minute play with two of my best friends!” Completing this course gave Hollie even more confidence in her choice to attend UE.

Hollie said that UE has fostered a unique culture that makes students feel right at home. “At UE, you really get to know people in a way that I didn’t see when I was visiting other colleges. I could tell right away that the professors actually cared and wanted to get to know me before I had even made the commitment to come here.”

Hollie explained that while UE professors commitment to student success goes beyond the open door policy in the department offices.

“Last semester we were all panicking about what to do after graduation. So we met Professor Griffith [Rob Griffith, professor of creative writing and English] at Olive Garden and he gave us a ton of information about grad schools and career options. It’s so awesome that he took time out of his evening to meet with three panicked students and make us feel so much better about graduating.”