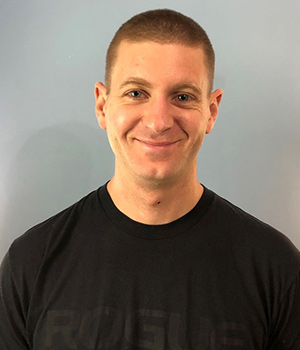 Where does your journey begin?

I am from Springhill, Tennessee. I am married to my high school sweetheart, Allison. We currently live in Evansville, Indiana with our four-year-old son, Wesley, and our beagle, Georgia. I recently graduated with my bachelor’s degree in Exercise Science from Austin Peay State University. After graduating from high school, I enlisted in the United States Army as a military police soldier. While serving, I traveled throughout the world and had the privilege of serving on deployments to both Iraq and Afghanistan. During my time serving, I had the honor of leading soldiers as a non-commissioned officer. Being a leader taught me countless lessons that I continue to apply every day.

Why did you decide to go to pursue physical therapy?

Through my time in service, I began noticing trends within the Army that were having a major effect on preparedness and soldier health. Namely, there was a dogged mentality to push through injuries and perpetual states of pain. While many soldiers sustained an injury in combat, most soldier’s injuries occur during training or on the home front. I began to work within my circle of influence to affect changes within smaller elements of the Army. For example, I created evidence-based physical fitness programs that were implemented within a platoon of 42 soldiers. Additionally, I attended the Army Master Fitness Trainer course to progress my knowledge and found myself reading scientific journals to guide training and recovery for soldiers. In my pursuit, I came to realize that to make changes at a greater level, I would require more formal training. My own experiences had brought me into the paths of many Physical Therapists who were working hard to affect similar changes. I had a great amount of respect for their abilities and their passion to heal and maintain the health of our nation’s warriors. Moreover, these Physical Therapists were making strides to prevent injuries through physical fitness and risk stratification. I was at my third duty station when I decided to pursue Physical Therapy; My goal being to expand on what other Physical Therapists are doing. I want to join their force and multiply the number of therapists working with soldiers on a more personal level. It is my goal to see a Physical Therapist at every battalion within the Army.

Why did you choose to attend UE DPT?

The University of Evansville gained my interest due to the vast array of experiences within the faculty. Several of the professors were very well known within the military community that surrounded me during my time in service. UE’s focus on personalization of every student’s success is second to none. Every day these professors come in and give it everything they have. It is very reminiscent of what good leadership looked like in the Army and it is why I am overwhelmingly grateful to be a part of this program.

What do you hope to do once you get your degree?