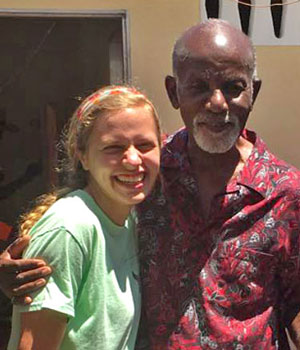 Country of Study: Trinidad and Tobago

What was your most rewarding experience abroad?

What was your favorite part about your host culture?

My favorite part about the host culture was the way that they welcomed every person as if they were family. Even when we first arrived, we were welcomed like a family member returning from a trip. Not often do you see that type of welcome in the States. Even amongst locals, the welcomes were so genuine and full of smiles and hugs. They could see someone they literally had just seen the night before and the greeting was still such a joyful, warm-hug welcome. I loved it.

What was your favorite activity during your time abroad?

Wow. That’s a tough one. We did A LOT. One of my favorite things was going to the school and getting to be around the kiddos. They are just so joyful and greeted us with smiles and hugs every day. I also thoroughly enjoyed going dancing at a club one evening. I quickly learned that dancing is not a skill set I’ve been gifted with. It was still so amazing to see the enjoyment these people had dancing together, and it didn’t matter if you were good or bad at all, just that you were having a good time. We were taught to dance Trini style, and wow. I have never danced like that in my life. The dance floor was full of people, and the beautiful thing was that it wasn’t separated into groups of people that knew one another already. It was one huge group, assorted ages, dancing up a storm. I was exhausted by the end, but it was magical.

What do you miss the most now that you’ve returned to the US?

I think what I miss most is the joy. Living conditions there compared to the US aren’t extremely poor, but they’re far from the same. Job situations, political situations, the general political climate isn’t exactly ideal. But each and every person had an attitude of both peace and joy. Peace because I think they were at terms with their situation, whatever it may be, and knew that worrying and fretting wouldn’t change a thing. Peace because regardless of how hard life may get, they’re alive and well and that’s what matters. And joy. Joy because when you’re alive and well, the only adequate response is to live happily and love others. And wow were they great at that. We can learn a thing or two from these sweet Trini friends.

What was the most challenging part of your trip?

The most challenging part of the trip for me was adjusting to the unfamiliarity. There were moments, especially at the beginning, when I got frustrated because I had to ask for things to be repeated so many times. I felt bad, but really it was just difficult to pick up on the accents quickly! By the end of the two weeks, things felt much better and slowly went from being unfamiliar to familiar. I grew used to the beautiful accents, new foods, and the way things were done. At the same time, I began to miss the familiarities of home. By the time we left, I was so ready to eat home food, and I needed a break from rice and chicken. I also began to miss my family and my people. Adjusting to a new culture can be hard. It’s crazy how the littlest familiarities about home become something that you miss dearly, and so beautiful that new things can so quickly become normal and beloved.

What is your best advice for students who participate in this program in the future?

Well first, go. Do it. It’s seriously one of the best experiences I’ve ever had. If you get the chance to go, GO. Second, I’d say the top advice for me was just be open. Open to trying the new food. Open to listening to the villagers… you can really learn a lot when you’re willing to just listen. Be open to different ways of doing things. Have an open mind and heart, and don’t make up your mind about anyone until you’ve heard their story. Don’t make up your mind about anything until you’ve tried it. And be willing to let the experience stretch you and grow you. It’s so worth it, and it’s such a beautiful thing. I’ll treasure it forever.