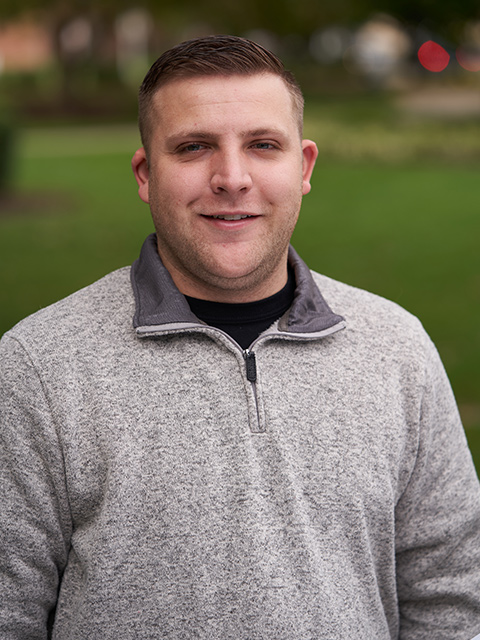 After moving to the Evansville area for his partner’s job, Shane was looking to make a change – and that change included going back to college to earn an undergraduate degree. He started by taking tours of colleges in the area, beginning with the University of Evansville.

“Starting with my first tour, I immediately felt a connection at UE that I didn’t feel during tours at other schools,” Shane said. “It was obvious that the people I met here cared about my story and wanted to help me find something that would fit.”

Following his first campus tour, Shane returned to UE for a follow-up visit. Interested in pursuing a history degree, Shane connected with history professor James MacLeod, current students, and even sat in on a history class. This kind of tour customization had not been available at other institutions, and it gave Shane a more clear picture of what it would really feel like to be a UE student.

“It was obvious this was the place for me.” Transferring credits he had earned at his previous institutions was a breeze with the help of UE staff, and before long, Shane was enrolled as a history major and beginning his first classes as a UE student. Coming in as a non-traditional student, Shane was several years older than many of his classmates, but the welcoming community at UE replaced the age gap with meaningful connections between faculty members and fellow students.

In a short time, Shane became deeply involved in the UE community, serving as treasurer and SGA representative of UE PRIDE student organization, an Admission Ambassador, and member of the History Club, among other things. Dr. MacLeod has also helped Shane get connected with the Evansville community. These connections have led to involvement with other community groups and a project on the Queer History of Evansville.

Shane’s future plans include going to law school, working in civil law as an advocate for equality, and perhaps pursuing politics. He feels that the academic quality and rigor at UE is preparing him not only for the first step of getting accepted to law school, but also for a fulfilling career of endless possibilities.