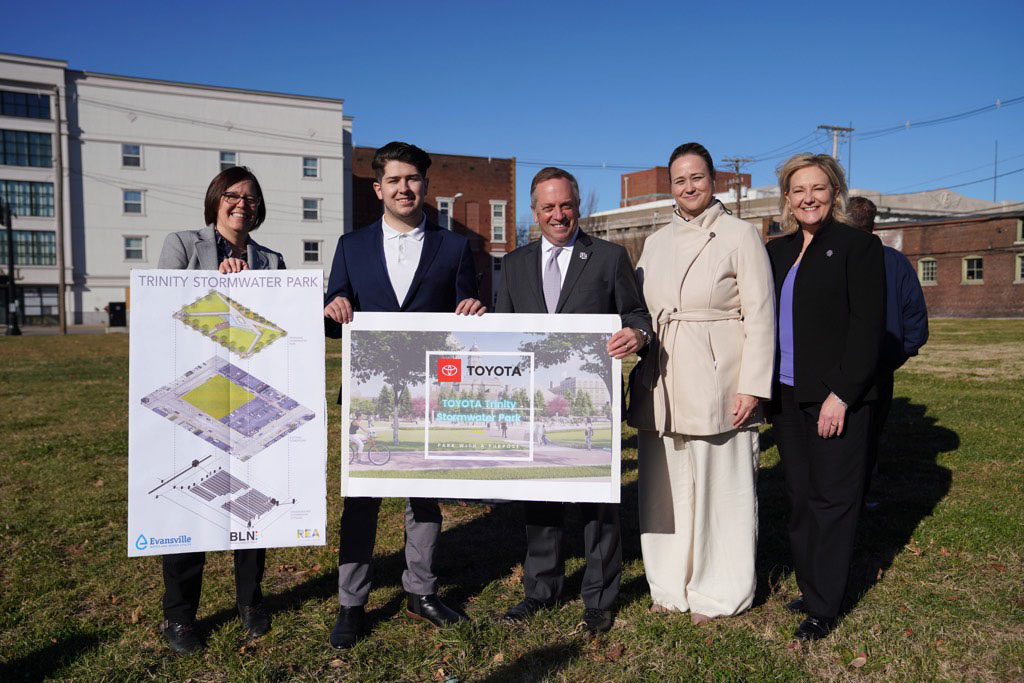 Robert Lopez, an Ethics and Social Change major, competed in the UE High School Changemaker Challenge during his junior year at Bosse High School. He and his friend came up with an idea for a wetland education park that collects rainwater and cleans it through the park's plants.

After claiming third place, Robert decided to attend UE and continue working on this project for the Evansville community. Through several ChangeLabs focused on the park, he has worked alongside local organizations to bring his idea to life.

On December 13, community partners met in downtown Evansville to announce the next phase of Robert's project. Community partners include the City of Evansville, Evansville Water and Sewer Utility, Toyota Indiana, and Evansville Vanderburgh School Corporation. Now, thanks to a generous $350,000 donation from Toyota Indiana, the Toyota Trinity Stormwater Park will eventually be fully accessible to the public while creating a better, more environmentally-friendly community.

"This is a testament to our community’s collaborative spirit," said Mayor Lloyd Winnecke. "Our schools, water utility, businesses, architects and designers came together to provide a unique, sustainable solution to improve our city’s infrastructure and quality of life.”

"Working on this park has been nothing short of a life-changing experience," said Robert. "Starting as a junior in high school, I’ve been able to take this idea from sketches on a whiteboard, to presenting a virtual 3D walk through to the Mayor, and UE’s Center has been there the whole way. Without this project and the amazing team at the Center, I wouldn’t be who I am or where I am today. I only hope that someday I can inspire someone the way they inspired me and help them change their community too.”

Mike Labitzke, former lead Project Director for Evansville Water & Sewer Utility, served as one of Lopez’s ChangeLab coaches for several semesters. His initial concept for a park on top of water filtration was shared with the Center, who then pitched the idea to Robert's AP Biology class at Bosse High School. The team never stopped working on the project.

“We are excited about our partnership with the University of Evansville on what will become the city’s largest green infrastructure,” said EWSU Executive Director Lane Young. “This project allows us to be good stewards of our environment by diverting millions of gallons of sewage overflow away from the Ohio River while preserving historic relics from the former Trinity Catholic Church and incorporating them into an urban garden for our community to enjoy.”

"The collaboration with so many different parts of the community elevates the impact,” said UE President Christopher M. Pietruszkiewicz. “UE is so pleased to do our part in advancing our community, and reinforce that our students, like Robert, demonstrate how we bring academics to life to solve real world issues.”

The Toyota Trinity Stormwater Park will divert approximately 25 acres of downtown storm water runoff from the combined sewer system to reduce combined sewer overflows (CSO) to the Ohio River as part of the City’s CSO Long Term Control Plan. The first phase of the project involved demolition of the buildings on the former Holy Trinity Church property, located at 3rd Street and Court Street in Downtown Evansville, with materials salvaged including the plinth, some limestone and stained-glass. These materials will be incorporated into the design of the park.

The next phase involves storm sewer and storage facility construction below ground to collect storm water runoff and promote infiltration into the sand and gravel layers below grade at the church site. This next phase will also involve finalizing design and construction of the top side amenities, and designing some of the wellness programs to be offered.

Toyota has been named the title sponsor and will work with Lopez and the UE Center for Innovation & Change to identify additional green space funding opportunities from corporations and individuals. Toyota has sponsored each High School Changemaker Challenge at UE, including the 2022 challenge that is currently underway.

“We are extremely honored to be the lead supporter on such a transformative project,” said Ted Brown, vice president of administration at Toyota Indiana. “Robert’s vision for an innovative solution—to what many may have considered a standard infrastructure project—shows leadership, vision and pride for his community. That’s why programs like UE’s Changemaker Challenge are so vital to the evolution and growth of our region, and why we at Toyota Indiana continue to support those efforts. We want to challenge those in our communities to seek out opportunities to pioneer ideas for our future like Robert did, so that together we can build a better future.”