Among other honors, the University of Evansville has been named a Best Midwest Value school in the annual Best Colleges rankings by U.S. News & World Report. UE was ranked third, up 10 spots from last year. This ranking is based on the school’s academic quality and net cost of attendance for a student receiving the average need-based financial aid.

UE was also a top-ten institution in the region -- ranked ninth among 165 institutions in the Best Regional Universities: Midwest category -- based on measures of academic excellence, faculty resources, student selectivity, and class sizes.

The University was listed in other Best Colleges U.S. News & World Report rankings, as follows:

In addition, UE was ranked at number 24 on the list of small private universities with the Best Undergraduate Engineering programs accredited by ABET. This ranking was based solely on the judgments of deans and senior faculty at peer institutions. The engineering program ranked 103 overall.

“Ranking as we did in these categories is just one of the many indicators confirming our success in maintaining the highest academic quality at the University of Evansville,” said UE President Thomas A. Kazee.

The University of Evansville was also ranked seventh on the Nation’s Most Military Friendly Schools list and as a Top Midwest School for International Students.

Additionally, UE was named one of the Best Schools for Study Abroad. To be considered, the study abroad program had to involve substantial academic work - a year or a semester, or an intensive experience equal to a course - and considerable interaction between the student and the culture. College presidents, chief academic officers, deans of students, and deans of admissions from more than 1,500 schools nominated up to 10 institutions with stellar examples of study abroad programs. The colleges and universities that were mentioned most often made the Best School for Study Abroad list.

“Study abroad is engrained in our culture here at the University of Evansville,” said Kazee. “From our intensive program at Harlaxton College in Grantham, England, to the many service trips we consistently take to places like Guatemala and China, UE students have ample opportunities to contribute on a global level.” 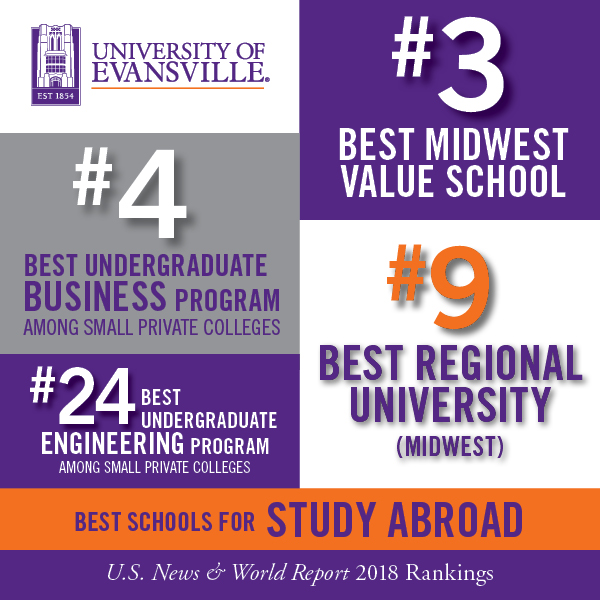