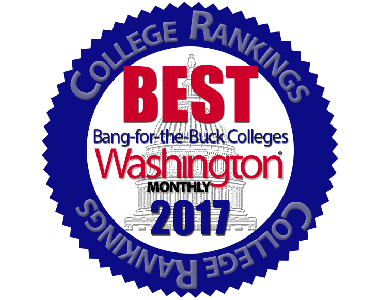 The University of Evansville is ranked number 7 in the nation among Baccalaureate Colleges on the 2017 Washington Monthly College Rankings. UE was also named a “Best Bang for the Buck” school by the publication.

Social mobility and research are considered in these rankings, along with the university’s commitment to service. Also examined were federal data on student outcomes, such as salary earned by graduates, and how quickly graduates are able to pay down the principal on their student loans.

Washington Monthly describes the Best Bang for the Buck list as their “exclusive list of schools that help non-wealthy students attain marketable degrees at affordable prices.”

According to UE president Thomas Kazee, the Washington Monthly ranking is particularly meaningful as its criteria directly reflect the mission of the University, especially as it relates to the quality and value of a UE education

“At the University of Evansville, our core purpose is to provide students with an academic experience that is not only of remarkably high quality, but is affordable.  This “Best Bank for the Buck” ranking – combined with our recent ranking as the third Best Value in the Midwest by U.S. News and World Report – is a powerful indication of the value of a UE education.

Washington Monthly is a bimonthly magazine based in Washington, D.C., that covers politics, government, culture, and the media. The complete 2017 College Rankings and methodology are available on the organization’s website.