The University of Evansville has announced the upcoming investiture of Robert Dion as the newest holder of the Igleheart Chair in Political Science. The ceremony is planned for Saturday, March 2, at 4:30 p.m. in Neu Chapel on the UE campus. It will be part of a weekend of academic celebrations that will also include the inauguration of the University’s new president, Christopher M. Pietruszkiewicz.

Dion is the chair of the Department of Law, Politics, and Society in the William L. Ridgway College of Arts and Sciences. He has taught American politics at the University since 2001. Before coming to UE, Dion held full-time teaching positions at the Maxwell School of Citizenship and Public Affairs at Syracuse University and at Wabash College. He earned his doctorate from Indiana University-Bloomington, for a dissertation focused on techniques of persuasive political communication. He also holds a master’s degree in American politics from the University of Michigan and a bachelor’s degree (magna cum laude) in French and political science from Wabash College.

At the University of Evansville, Dion has received the United Methodist Exemplary Teacher Award and the Sydney and Sadelle Berger Award for Service, and he has been named a Global Scholar by the Institute for Global Enterprise. He serves as an associate researcher for the Observatoire sur les Etats-Unis at the University of Quebec in Montreal.

Outside the classroom, Dion serves as the longtime chair of the Evansville Vanderburgh County Human Relations Commission and is a member of the Indiana State Advisory Committee to the U.S. Commission on Civil Rights. He is quoted regularly in news stories about political developments in Indiana or in the United States, and he has appeared frequently on radio and television news programs, including several French-language broadcast outlets.

The Austin Igleheart Chair in Political Science is the culmination of a long relationship between the Igleheart family and the University of Evansville. John L. Igleheart supported bringing Moore’s Hill College to Evansville in 1919. In the late 1950s, the Igleheart’s son, Austin S. Igleheart, approached President Melvin Hyde about establishing a chair in government at Evansville College. The result was the establishment of the Igleheart Chair in Political Science, which was created to promote the study of government, particularly local government and political science. The chair is awarded to a faculty member who has demonstrated an understanding of the importance of teaching excellence in the field of political science. The chair is also responsible for promoting student internships and forums of interest to political science majors and the wider community. 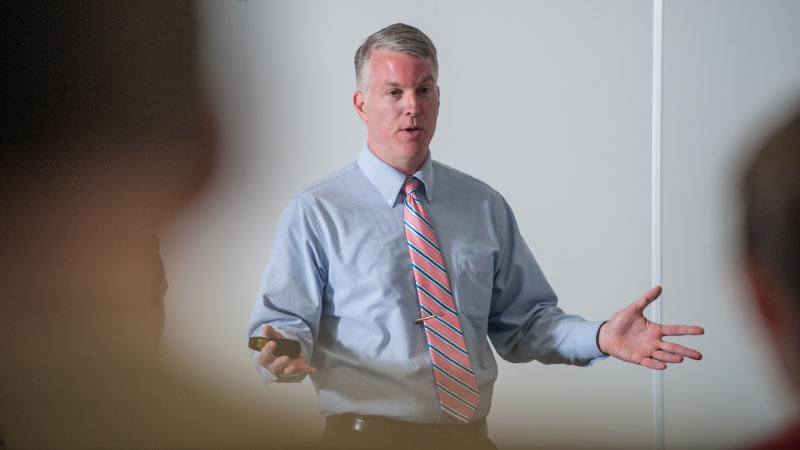