“When I began my tenure as president of the University of Evansville just ten months ago, we set into motion several strategic initiatives, including this rebrand,” said Pietruszkiewicz. “It was obvious from the beginning that members of the UE family share a deep pride in the history of this place, but we were not all speaking with the same voice. Now, we’re equipped with the tools to strategically connect the institution and athletics into one single brand to attract the next generation of Aces.”

After a nationwide search that began in August of 2018, the University partnered with Ologie, a marketing and branding firm based in Columbus, OH, for the project.

“So often, an identity project tries to chase the notion of trend, rather than authenticity,” said Paul Davis, executive creative director at Ologie. “We were inspired by the university’s rich history of previous logos, which led us to this approach that is rooted in legacy, and rallies today’s UE community under one strong, simple logo that links together every generation of Aces.”

The press conference was held as part of the kick off for the University’s annual day of giving.

“As our fight song says, we ‘cheer with pep and vim for white and purple’,” said Pietruszkiewicz. Today just happens to be our annual Pep and Vim day of giving—a day when Aces across the country and the world come together to give gifts of support that provide future Aces with the opportunity to have a transformative future. We could not think of a better day to unveil our new, unified look that will only strengthen the message we send to the world about this life-changing place.”

Visit www.evansville.edu/give to make a gift of support during Pep and Vim Day. 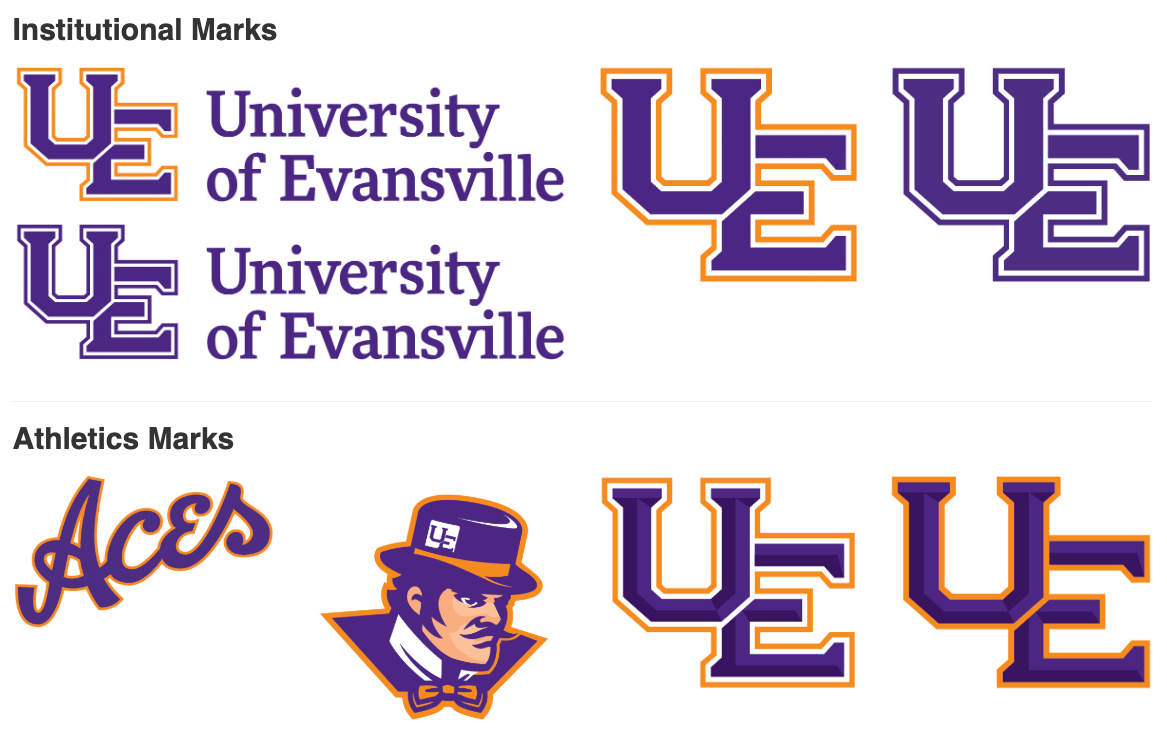 WHY WAS A REBRAND NECESSARY?
The University of Evansville and its athletics department each had logos and branding that did not resonate in the Evansville community and across the country.  There was a lack of a strong and unified brand that did not portray the desired message. An updated, cohesive rebranding initiative was necessary in order to bring the institution and athletics together for one cohesive, modern look that will give the University of Evansville and the athletics department a unified message.

Ologie also created an extensive brand framework that will set the University of Evansville apart in the marketplace by highlighting its transformative education and the unique positioning of the Ashoka U Changemaker Campus designation and the changemaking culture that empowers students to improve the world around them.

WHO DESIGNED THE NEW LOOK?
Ologie is a branding and marketing agency based in Columbus, OH.  The mission of the company is to work “with clients who advance the greater good. We’re a team of strategic thinkers, creative problem solvers, and bold storytellers. Together, we help organizations define their purpose, convey their story, and achieve their goals through a full range of media, including print, digital, environmental, social, and video.”

Before they could define UE’s brand story and design logos that accurately depict the University’s current momentum, Ologie first needed to develop a deep understanding of the University of Evansville. They took a well-rounded research approach that included:

WHAT IS THE TIMELINE FOR USE OF THE NEW LOGOS?
Today’s press conference signified a local launch of the branding and logos.  Certain digital platforms including University and athletic websites and social media will adopt the new logos immediately.  Signage and publications on the UE campus will utilize the updated logo over the coming months.  Athletic uniforms and apparel will reflect the updates as teams enter the next purchase cycle. Fully rebranding the campus and athletic facilities is a time-consuming and expensive endeavor.  This process will be completed giving priority to highly visible locations and only as funding is identified.