Theatre Alums, Assistant Professor Open on Broadway in To Kill a Mockingbird

As part of Broadway’s historic reopening, two University of Evansville Theatre alumnae have roles in TO KILL A MOCKINGBIRD, by Aaron Sorkin, at the Shubert Theatre on Broadway, opening on Tuesday, October 5. 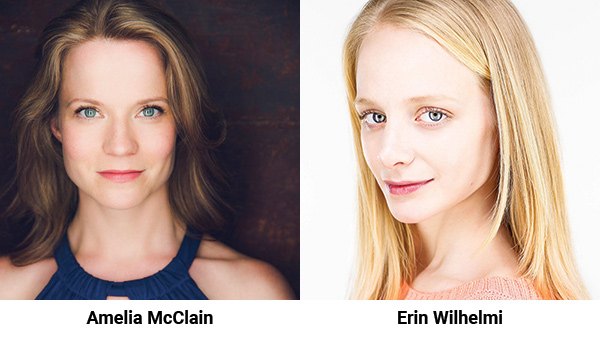 Amelia McClain has been on the faculty at UE since 2018 and serves as an Assistant Professor of Acting. She teaches all levels of acting, as well as senior-level audition techniques and directs one production each year. Before returning to her alma mater, she completed a year-long tenure on Broadway as Sandra in the smash-hit production of THE PLAY THAT GOES WRONG. Also on Broadway, she worked on FOOL FOR LOVE, NOISES OFF, THE HEIDI CHRONICLES, THE HOUSE OF BLUE LEAVES, and the Tony Award-winning VANYA & SONIA & MASHA & SPIKE. Amelia has been in over 20 productions off-Broadway and in regional theatres across the country. Her favorites include OCTOBER/ NOVEMBER at Ensemble Stage Theatre in New York, Brooke in NOISES OFF at Arena Stage in Washington, DC, and Juliet in ROMEO AND JULIET at the Pioneer Theatre Company in Utah. If you don’t blink, you can catch Amelia in the film INSIDE LLEWYN DAVIS, written and directed by Joel and Ethan Coen. A Texas native, she received her BFA from the University of Evansville, in 2003, and MFA from the graduate acting program at New York University’s Tisch School of the Arts. She is a member of Actors Equity Association. In TO KILL A MOCKINGBIRD, Amelia plays the roles of Ms. Stephanie and Dill’s mom.

Erin Wilhelmi, a native of Louisville, Kentucky, made her Broadway debut in the Tony-nominated revival of Arthur Miller’s THE CRUCIBLE. Her other Broadway credits include TO KILL A MOCKINGBIRD (original cast), and A DOLL’S HOUSE PART 2. She has played several roles in Off-Broadway productions, including, GNIT (Theatre for a New Audience), AMERICAN HERO (Second Stage/Williamstown Theatre Festival), THE GREAT IMMENSITY (The Public Theater), CORE VALUES (Ars Nova), and THE GREAT GOD PAN (Playwrights Horizions). In addition to her roles on stage, she is most notably known for her role as Alice in the hit film, THE PERKS OF BENG A WALLFLOWER. Her other Film/TV credits include THE GILDED AGE, BABY RUBY, SWEET, SWEET LONELY GIRL, BETTER CALL SAUL, THE KNICK, TAXI BROOKLYN, MONSTERLAND, LAW & ORDER: SVU, GOSSIP GIRL, and THE ACCIDENTAL WOLF. Erin received her BFA from the University of Evansville in 2008. She is a member of the Actors Equity Association and the Screen Actors Guild-American Federation of Television and Radio Artists (SAG-AFTRA) organization.