The University of Evansville’s Concrete Canoe team won the Innovation Award and earned 10th place overall in the 2013 American Society of Civil Engineers National Concrete Canoe Competition — cracking the top 10 for only the second time in team history.

The 26th annual competition took place June 20-22 at the University of Illinois at Urbana-Champaign. Twenty-three teams from some of the top engineering schools in the United States and Canada competed and were judged on the design, construction, innovative features, and racing ability of each concrete canoe.

UE’s 13-member team finished sixth in the technical paper category (the team’s highest finish in history), 10th in product design, 11th in oral presentation, 13th in the races, and 10th overall. UE was the smallest school and the only private American university to finish in the top 10.

UE also won the competition’s Innovation Award for the strategic use of a dimpled texture to reduce drag on their canoe, “Palus” (an astronomical term to describe a surface feature on the moon). The canoe, which measures 19.9 feet long and weighs 216 pounds, was inspired by an episode of “MythBusters” that investigated whether a car with a dimpled texture like a golf ball could obtain better gas mileage.

“I’m incredibly proud of our students’ work over the course of the academic year, which culminated in an outstanding overall finish at the national competition, as well as a special award recognizing their creativity and willingness to take a risk,” said Mark Valenzuela, associate professor of civil engineering and the team’s faculty advisor. “They put in long hours without receiving class credit, all for the love of a challenge, the satisfaction of a job well done, and the pride in carrying on the winning tradition of UE’s Concrete Canoe team.”

In 2011, UE hosted the National Concrete Canoe Competition and was the smallest school ever invited to do so. This year marks the fourth time in the past five years that UE has qualified for nationals. 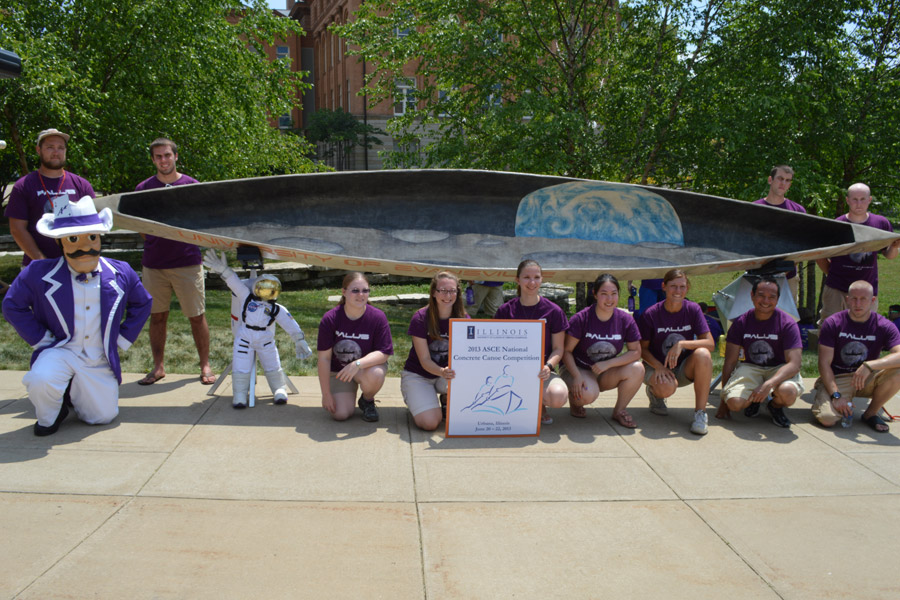