The University community today is mourning the loss of Professor Emeritus Dudley S. Thomas, who was a member of the UE faculty for more than 30 years.

In memory of Dr. Thomas, we have below reprinted a story from the Summer 2006 UE Magazine, which profiled Dr. Thomas in the "Where Are They Now?" section. Current theatre faculty are compiling a book of thoughts and memories of Dr. Thomas to send to his family; to contribute, please send thoughts, condolences, and stories to R. Scott Lank at sl29@evansville.edu.

Since retiring from the University of Evansville in 1995 as a professor of theatre, Dudley Thomas has pursued a myriad of interests. He is a playwright and an avid reader. He has also been involved in competitive shooting for many years. Thomas and his wife Sandra have three young grandchildren they enjoy, and they like to travel.

While they reside in Newburgh, Indiana, they vacation at a house they rent annually in Ireland. “It was sheer luck that we found it,” he explains. “We had been staying somewhere else and one day, we just decided to go over the mountain and see what was there. It was a little town of 1,500 people. While my wife was in a woolen shop, I walked up the street and saw a realtor’s office. There was a picture of a house in the window to let. It’s in the part of Ireland I like. It’s rugged. There’s a river that runs past the house to the sea. You can see the tallest mountain in Ireland from the window.”

When overseas, Thomas and his wife see many theatre productions. He vividly remembers a performance in England of the classic Greek play, Aeschylus’s Oresteia “which is one of the greatest plays of all time. The London National Theatre put it on thinking it would just pass quickly and then they’d follow with Guys and Dolls or something more likely to be popular. But six months later it was still going strong.”

That, Thomas believes, is how the public always responds to good theatre, which in his view is an artistic medium that represents everyday life – but at a different level. “There should be presence, power” in stage productions, says Thomas. “Entertainment is one thing. Theatre is another.”

Despite his passion for theatre, it wasn’t Thomas’s first choice of study. After earning his Bachelor and Masters of Arts degrees in English literature from the State University of Iowa, he realized that didn’t quite satisfy him. “I found I couldn’t get more than straight English literature,” he explains. “I wanted to read European literature, French playwrights. I like variety.”

It was fortunate that he enjoys variety, because that’s what he found after accepting a job at UE in 1962. He was offered the position by Sam Smiley, head of UE’s Speech and Drama Department, after the two met at Indiana University where Thomas was working on his dissertation. Thomas would discover that his duties at UE would be diverse, to say the least.

At that time, the department was a very Spartan organization. Thomas says he and Smiley “had little equipment. There was only one other person in the department besides me and that was Sam. So when he was directing, I did the costume and set design, and when I directed, the reverse was true. We did everything. Everyone pulled together to get those productions ready. Coming from a literature background, I didn’t know much about costume or set design. I just winged it. That was the great thing about it. It was all fresh and new.”

“I just loved it. I was supposed to finish my dissertation but I was having so much fun that five years passed and I received a note from (IU) asking ‘where is it?’” he laughs. “I had to take a year’s leave of absence to finally finish.” He received his Ph.D. in drama from IU in 1968.

“I had so much fun at UE,” Thomas recalls. “I thoroughly enjoyed the students. I don’t know the new generation, but I imagine they’re much of a kind.” When he began teaching, however, many were not “theatre students as such. They just sort of drifted in and then drifted out again. They were really nice and worked hard, but most were not serious about acting. Ron Glass was a great exception. He was one of our first ‘real’ theatre students.” (Glass, a 1968 graduate of UE, went on to a successful acting career, including a role on the series, Barney Miller.)

These were exciting years as UE was developing its renowned theatre program and Shanklin Theatre was built. In 1968, Thomas became department chair. He enjoyed it but “always thought that a chairman of a department should spend just three hours a week taking care of administrative matters. But it doesn’t work that way.”

As he neared retirement, he started to feel “burned out. I began to feel that I didn’t know the students really anymore. I knew it was time. I knew I had to stop.”

He sometimes misses teaching, but takes satisfaction with what he was able to accomplish during his years at the University. “You can’t teach talent – just ways in which to convey thought, emotions,” he says, but “I think I passed along a lot of information over the years.” 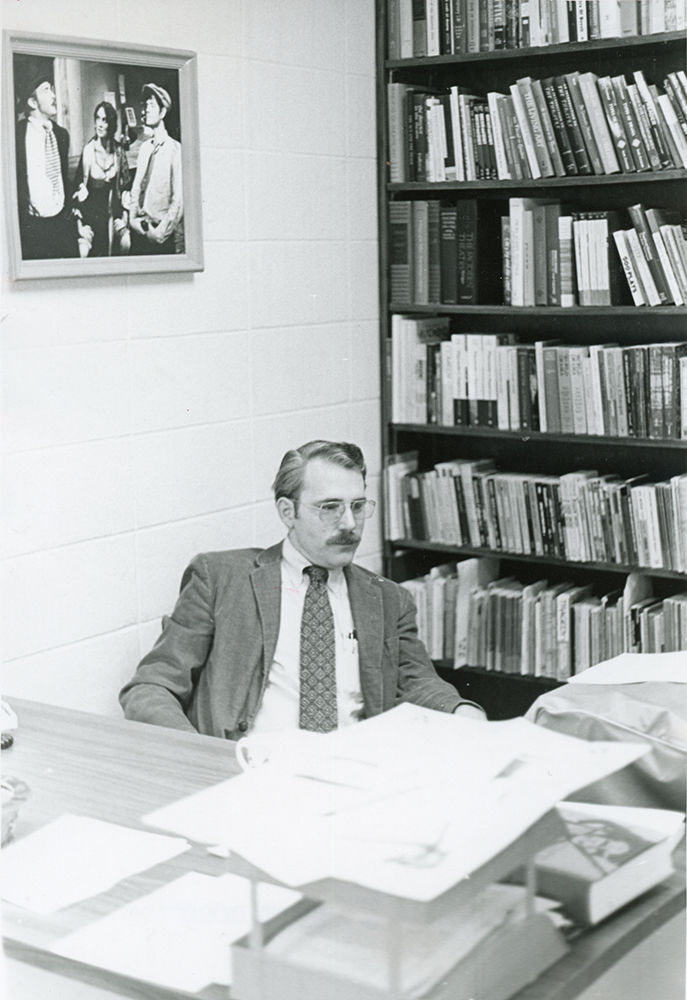