A recently discovered, unpublished composition of organ music, inspired by the art of James McNeill Whistler, will be the highlight of a faculty recital featuring Douglas Reed, UE professor emeritus of music and University organist. Reed will perform a free, public recital at 7:30 p.m. Tuesday, September 24, in UE’s Wheeler Concert Hall.

In addition to traditional music by Bach, Buxtehude, Dupré, and Sweelinck, the recital will feature the Indiana premiere of a little-known composition by American composer William Albright: Whistler (1834-1903): Three Nocturnes. To date, the 20-minute piece, written in 1989, has only been performed at Harvard University, in Cleveland, and at the University of Wisconsin. It was inspired by three paintings by James McNeill Whistler: Nocturne in Grey and Gold: Chelsea Snow, Nocturne in Black and Gold: The Falling Rocket, and Nocturne in Blue and Silver.

UE’s Reed studied under Albright at the University of Michigan, and the composer gave Reed a detailed program note about the work, which remained in manuscript form when he died. After Albright’s death, Reed discovered the composer’s sketches and hand-written performance score among Albright’s papers in the Bentley Historical Library at the University of Michigan. Working with these documents and a recorded performance of the work, Reed has re-notated and annotated the work in preparation for performances at the University of Evansville, at the Eastman Rochester Organ Initiative at the Eastman School of Music in Rochester, New York, on September 28, and for future publication.

William Albright had a strong connection with the University of Evansville. The University commissioned two major Albright works: Four Fancies for Harpsichord (1979) with a grant from the Mesker Music Trust, and Symphony for Organ with Percussion (1986) with the support of the Friends of UE Music and a grant from the Indiana Arts Commission and the National Endowment for the Arts. Albright’s performances at UE included a Wheeler Concert Hall recital featuring piano jazz styles and the world premiere of his well-known Organbook III (1978-79) in Neu Chapel. 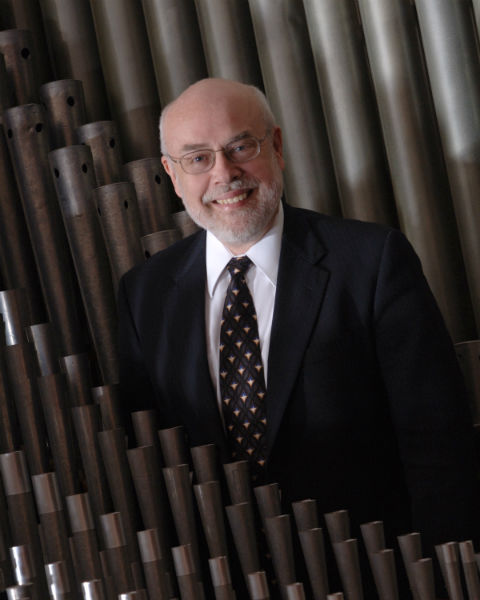