Against stiff competition from student veteran organizations around Indiana, UE VETS from the University of Evansville today was named the winner of the SVO Hall of Fame Competition, held October 27 in Indianapolis and sponsored by the Military Family Research Institute at Purdue University (MFRI).

The event, which was open to the public, showcased the talents and achievements of the top student veteran organizations in Indiana. The University of Evansville was the only private college or university selected to compete. Other participants were Ball State University, Indiana University Southeast (second place), Ivy Tech Bloomington, Ivy Tech Sellersburg, Ivy Tech Wabash Valley, and Purdue University (third place).

The event was the culmination of previously held grant competitions sponsored by Operation Diploma, MFRI’s post-secondary education initiative. All organizations presented to a panel of judges before a live audience at the NCAA Hall of Champions.

Army veteran Jariah Besing, a civil engineering major from Francisco, Indiana, and Army Reserve member and Iraq veteran Hayli Cingle, a criminal justice and sociology major from Landisville, Pennsylvania, presented on behalf of UE VETS, discussing how the organization provides support and outreach to veterans, current service members, and their families as they transition from the military to college and beyond to the workforce. They received high praise from all of the judges.

“The University of Evansville is an example of what an SVO should be,” said Michael Dakduk, a competition judge and executive director of Student Veterans of America. “Not just in Indiana; they are a national example of what SVOs can aspire to be.”

UE VETS has successfully competed for Operation Diploma grants every year since 2009, and has been named a military-friendly school by G.I. Jobs for four consecutive years. The University’s 2009 partnership with the U.S. Department of Veterans Affairs to serve as a Yellow Ribbon school has led to a 383 percent increase in student veteran enrollment since 2009.

The SVO has put on a number of collaborative events, including a Veterans Day 5K Walk, Run, and Roll race, a veterans’ fair, and a citywide book read aimed at increasing understanding of readjustment issues after military deployments. These events engaged a number of different constituencies, including UE alumni veterans, the UE campus, and student veteran organizations at the University of Southern Indiana and Ivy Tech Community College Southwest.

During opening remarks at the competition, MFRI Director Shelley MacDermid Wadsworth emphasized that all organizations in attendance earned their way there through exemplary work.

“There’s a reason why you have been chosen to participate today,” she said. “By providing important avenues of connection and support, you are crucial to your peers’ success, and you are also helping to educate your faculty and administrators about how much student service members and veterans bring to Indiana campuses. Thank you for making a difference on your campuses, in your communities, and beyond.” 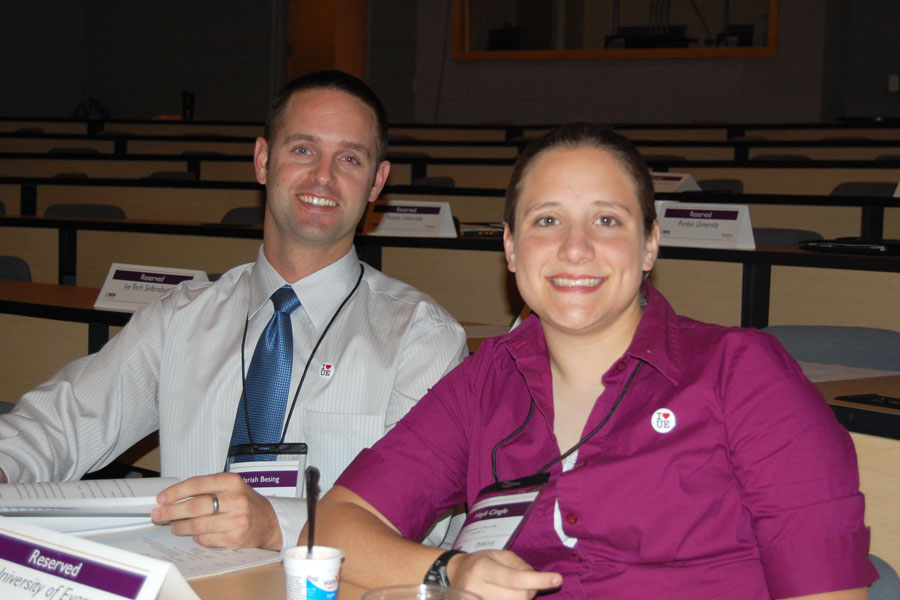