On September 14, 2019 the Friends of the Peters-Margedant House received Indiana Landmarks' 2019 Servaas Memorial Award in the youth-serving category for its work to engage the next generation in preservation and history, recruiting students in its efforts to promote Evansville's Peters-Margedant House.

According to the Indiana Landmarks website, the Servaas Award recognizes outstanding achievements in historic preservation, and is awarded to programs that engage young people in preservation or elevate their appreciation of landmarks, especially programs that have ongoing impact.

In 2014, the Peters-Margedant House was listed on Indiana Landmarks' 10 Most Endangered list, which led to the formation of the Friends and a plan to move the tiny home for use as a learning lab at the University of Evansville. Now restored, the house hosts regular guided tours. This year, a semester-long course will challenge college students to figure out how to equip the house with self-guiding tour technology.

"It's really the type of architecture that appeals to children of all ages," noted Dr. Heidi Strobel, curator at the house. "For the elementary students, it's on their scale. For students heading to college who are environmentally engaged and like the idea of leaving a small footprint, it resonates with them as well."

The 552-square-foot Peters-Margedant House was designed and built in 1934 by William Wesley Peters, a one-time student at Evansville College and MIT. Peters went on to be the first apprentice of Frank Lloyd Wright and became the great architect's right hand man, working on such structures as Fallingwater and the Guggenheim Museum in New York City.

Wes Peters and the Peters-Margedant House are the subjects of an exhibit called "William Wesley Peters: Evansville's Connection to the World of Frank Lloyd Wright," which is running at the Evansville Museum of Arts, History, and Science through October 27, 2019. Images, drawings, and models will illustrate Peters' career while he was in Evansville, as well as his work with Wright and post-Wright.

Those interested in the Peters-Margedant House are welcome to visit campus for a tour. Upcoming open house dates include September 21 and 28, and October 19 from 11:00 a.m. - 1:00 p.m. 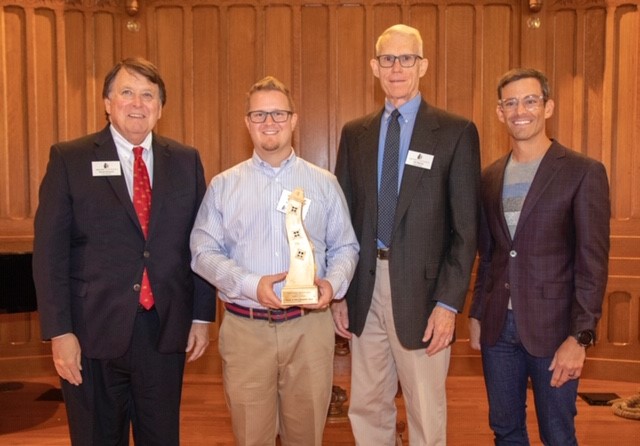