The Classical Guitar Society of Evansville and the University of Evansville will co-sponsor Guitar Fest, an annual concert that brings together local classical guitarists.

The concert will take place at 7:30 p.m. Friday, February 22 in UE’s Wheeler Concert Hall. Tickets are $15 for the general public, $5 for any student, and free for UE students.

The first half of the concert will feature an ensemble of 12 guitarists performing works by composers such as Georges Bizet, Leroy Anderson, and Manuel Penella. The second half will feature Evansville musician Eric Lund performing Latin music by composers including Heitor Villa Lobos, Antonio Lauro, and Federico Moreno Torroba.

Lund, a native of St. Paul, Minnesota, began his classical guitar studies at age 14. He came to the University of Evansville to major in music therapy and study classical guitar with Renato Butturi. As a UE student, Lund attended guitar workshops at the University of Cincinnati’s College-Conservatory of Music, where he took master classes with Clare Callahan, Jeffrey Van, Stanley Yates, and Carlos Perez. During his senior year, Lund was a finalist for the Department of Music’s prestigious Gumberts Award, which honors the top performer in the senior class.

After finishing his UE coursework in 2007, Lund completed a music therapy internship at Good Samaritan Home in Minneapolis, then returned to Evansville to accept a position with Integrative Music Therapy, a local private practice. He currently works as a music therapist for individuals with developmental disabilities.  Lund is also a certified Music Together teacher for early childhood music classes, holds a credential in neurologic music therapy, and performs regularly on guitar at events throughout the Tri-State. 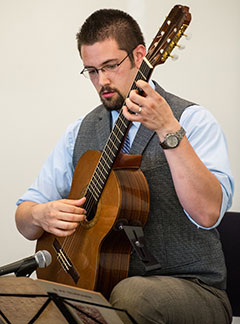