The College of Engineering and Computer Science held its annual celebration for Engineers Week at a reception in Eykamp Hall on February 19, 2020.  Several engineering majors were announced as new inductees in the Tau Delta Kappa engineering honor society by Dr. Jared Fulcher, assistant professor of mechanical engineering.  Other engineering students were recognized by the college and the Office of Development.

Linh Trinh, a junior computer engineering major received the Paul “PR” Brown Spirit Award.  This award is presented annually to an engineering major who has been nominated by the faculty and has completed at least four semesters in good academic standing, who is an encouragement and help to his/her fellow students, and who demonstrates leadership in fostering cooperation and camaraderie among the engineering students.

Jesse Batronis, a junior mechanical engineering major received the James M. Hall, Jr. Memorial Award.  This award is presented annually to a student of the junior engineering class who is considered by the faculty to be the most outstanding based on scholastic achievement, extra-curricular activities, character, responsibility, attitude, and potential for professional growth.

The Engineers Week Reception was hosted by the Dean’s Advisory Council for the College of Engineering and Computer Science.  The College is appreciative of generous donations supporting the banquet by Lead Sponsor ALCOA and Table Sponsors, Control Specialists, Inc., Embry Automation & Controls, IEEE, Lochmueller Group, PCI Skanska, and the UE Student Government Association. 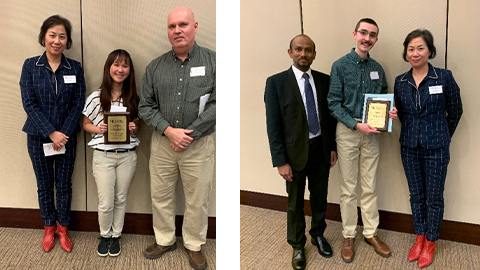