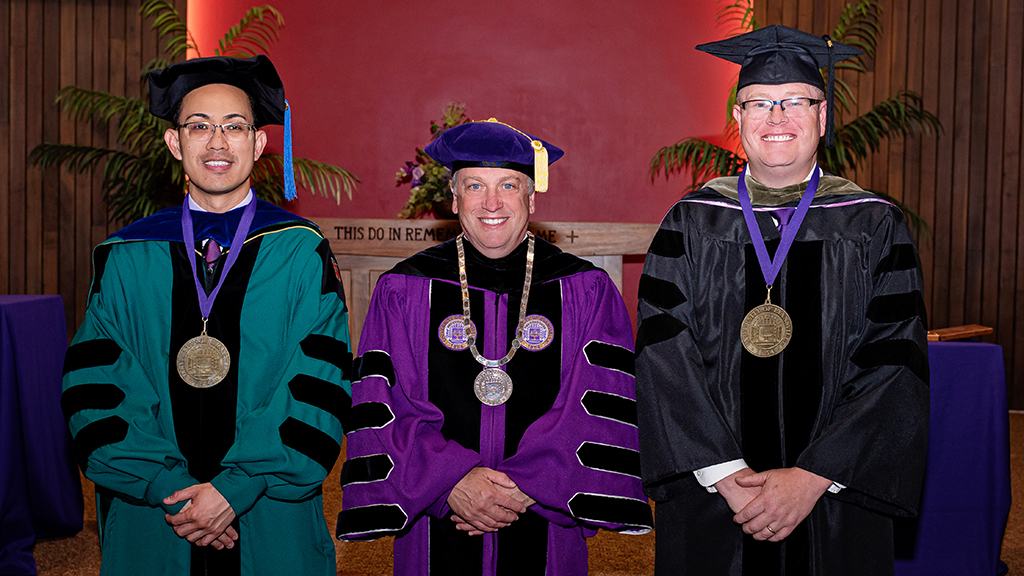 On May 2, 2022, the University of Evansville held an investiture ceremony for two faculty members: Todsapon Thananatthanachon, PhD; and Andrew Lampkins, PharmD, PhD. Both individuals were invested as the Wargel Endowed Chair of their respective programs, which was made possible due to a generous gift from Bob and Judy Wargel.

Thananatthanachon, or known by his colleagues and students as “Dr. Tod,” will now serve as the Wargel Endowed Chair in Chemistry for the Wargel Department of Chemistry in the William L. Ridgway College of Arts and Sciences. As an associate professor, he teaches a variety of courses and maintains an active research group in the area of organometallic chemistry, green chemistry, and catalysis. Dr. Tod also serves as a faculty research advisor for the Chemistry Club, and he established an annual Chemistry Club Lecture Series that invites distinguished researchers in all areas of chemistry to present on campus.

Lampkins was invested as the Wargel Endowed Chair in Physician Assistant Science for the Master of Physician Assistant Science program in the College of Education and Health Sciences. After earning his PhD in organic and medical chemistry, he completed a Walther Cancer Institute Postdoctoral Fellowship at the University of Notre Dame. Before he became an associate professor for the physician assistant program, he was an assistant professor and inaugural G. Richard and Rita ’59 Eykamp Endowed Chair in Chemistry.

Following the formal ceremony, which was held in UE’s Neu Chapel, guests were invited to a reception where UE unveiled the Robert and Judy Decker Wargel Department of Chemistry. The department and its new signage are located on the third floor of Koch Center for Engineering and Science.

Bob and Judy Wargel are two alumni and friends of the University whose generosity has supported remarkable student experiences, cutting edge faculty research, and continuously enhanced academics. They met one another at UE, and both earned degrees in chemistry. After successful careers, the Wargels followed their love of volunteering and passion for improving health and wellness in third-world countries. They also gave countless hours to the Department of Chemistry by sponsoring summer internships for students and establishing a planned gift to the department.