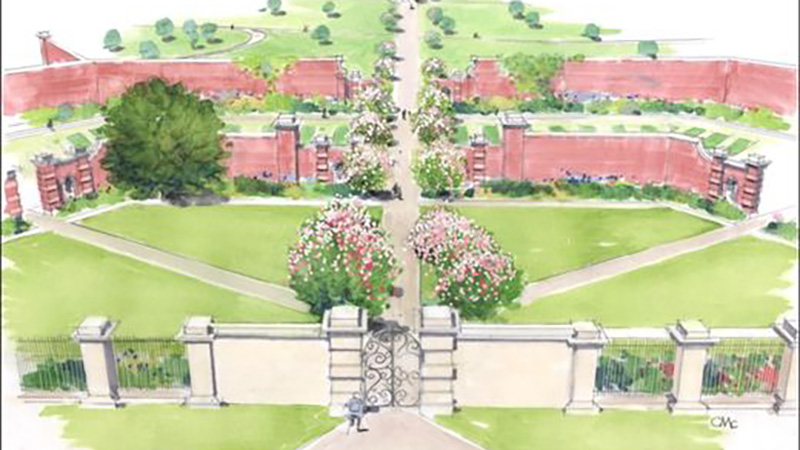 There are many things that make the manor unique, and FORWARD>> The Campaign for the University of Evansville will bring growth to these foundations. Led by the staff, faculty, and administration who live and work at Harlaxton, Forward>> first aims to bring the grounds back to life – specifically revitalizing a large and long-dormant walled garden.

A highly innovative and distinct garden in the 19th century, Harlaxton’s Walled Garden remains an architectural wonder even today and is the sixth largest of its kind in Britain. Gregory Gregory, who commissioned the manor and garden, was innovative and ambitious in his vision. Through the equally ambitious Forward >> campaign, Harlaxton will be able to bring the garden and its buildings back to life. Once completed, the garden will be a unique space where students can learn, research, and even relax among the educational gardens and structures.

Much of the renovated facility will be open to the public as well, allowing a curious community to step into the grounds to interact with students, attend events, or simply enjoy a cup of tea in the burgeoning garden.

The Walled Garden was once an important part of the manor’s self-sustainment process, providing food for those who lived at the manor. According to Carter, we may see a return to that mission soon.

A sustainable future will unfold at Harlaxton in many ways, thanks to the support provided through this campaign for the University of Evansville. By supporting ambitious growth and giving more students the access to this unparalleled study abroad opportunity, the gem of Harlaxton College will be a stalwart part of the UE experience for another 50 years and more.

“The projects at Harlaxton have taken on a life of their own,” says Carter, “and we can’t wait to see what ends up happening on the other side.”