The University of Evansville’s Department of Creative Writing, with generous support from the Efroymson Family Fund, will host a two-day symposium on April 19-20 dedicated to the life and work of world-renowned author Joyce Carol Oates.

The symposium includes the following events, all of which are free and open to the public:

In April 2012, the Department of Creative Writing received a $10,000 grant from the Efroymson Family Fund to help fund the Joyce Carol Oates Symposium, which follows the tradition of the successful Arthur Miller Symposium that took place at UE in 1998.

“The Arthur Miller Symposium showed us that an artistic event of this caliber has the power to make a lasting impact on UE students, faculty, and the community at large,” said William Baer, UE professor of creative writing. “A visit by Joyce Carol Oates, made possible by the Efroymson Family Fund, will be a significant event in the history of UE, and an extraordinary opportunity to raise awareness of the critical importance of the arts in our lives.”

Oates is one of the world’s most distinguished writers, having been nominated three times for the Nobel Prize. Born in upstate New York in 1938, Oates earned her Bachelor of Arts from Syracuse University in 1960 and her Master of Arts from the University of Wisconsin in 1961. She is currently the Roger S. Berlind Distinguished Professor of the Humanities at Princeton University.

Her literary accomplishments have been recognized by numerous awards, including the Fairfax Prize for Lifetime Achievement in the Literary Arts, the PEN/Malamud Award for Excellence in short fiction, the Rosenthal Award from the American Academy of Arts and Letters, a Guggenheim Fellowship, and the O’Henry Prize for Continued Achievement in the Short Story. In 2010 she was awarded the National Humanities Medal by President Barack Obama.

The symposium falls on the 50th anniversary of Oates’ first published book, By the North Gate (1963), a collection of short stories. Since then, Oates has published over 80 books in numerous genres: novels, short story collections, poetry, plays, literary criticism, children’s books, mystery and horror novels, various anthologies, and even a book-length essay entitled On Boxing. Her works of fiction include: Them, winner of the National Book Award; Black Water, nominated for the Pulitzer Prize; Zombie, recipient of the Bram Stoker Award; What I Lived For, nominated for the PEN/Faulkner Award; Blonde, nominated for the Pulitzer Prize; You Must Remember This, praised as “an American masterpiece” by James Atlas; The Falls, recipient of France’s prestigious Prix Femina; We Were The Mulvaneys, selected as an Oprah Book of the Month and subsequently made into a movie starring Beau Bridges and Blythe Danner; and the New York Times bestseller The Gravedigger’s Daughter.

The University of Evansville wishes to thank the Efroymson Family Fund, a fund of the Central Indiana Community Foundation, for its support of the arts at UE. Since the fund was established in 1998, it has awarded more than $70 million to nonprofit organizations in central Indiana and beyond. For more information on the Efroymson Family Fund, please visit www.cicf.org/efroymson-family-fund. 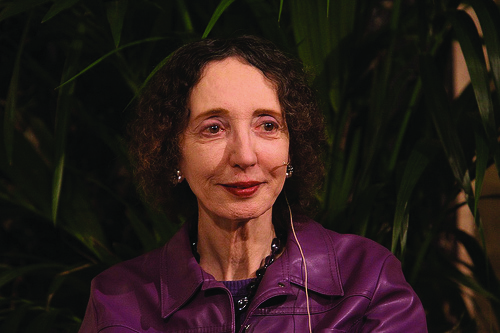