UE Opera to Perform "The Magic Flute" This Weekend

A dragon, an evil queen, a trio of spirits, and love at first sight are just a few of the elements that make up W.A. Mozart’s beloved opera The Magic Flute, which University of Evansville students will perform this weekend.

Performances will take place at 7:30 p.m. April 19 and 20 in UE’s Wheeler Concert Hall. Tickets are $10 for general admission and free to UE students with ID. Tickets may be purchased at the door or reserved by calling the Department of Music at 812-488-2754.

Sung in German (translated for the audience above the stage) with spoken dialogue in English, The Magic Flute features full costumes, sets, lighting, and accompaniment by piano, flute, and cello. The opera tells the story of a prince on a mission to rescue an enslaved princess – with help from a flute that has magical powers.

The 29-member cast of The Magic Flute will perform under the direction of Jon Truitt, associate professor in UE’s Department of Music, who serves as head of the voice area and director of the opera program.

“The Magic Flute is one of the most-performed operas in the world. It’s funny, romantic, and full of adventure and beautiful music, which makes it enjoyable for first-time opera patrons and seasoned fans alike,” said Truitt. “Students began rehearsing last fall, and I’m incredibly proud of the time and effort that they have put into singing and acting these challenging roles.”

The University of Evansville wishes to thank the William E. Schmidt Foundation, Alcoa Foundation, and Friends of UE Music for their generous support of this opera production. 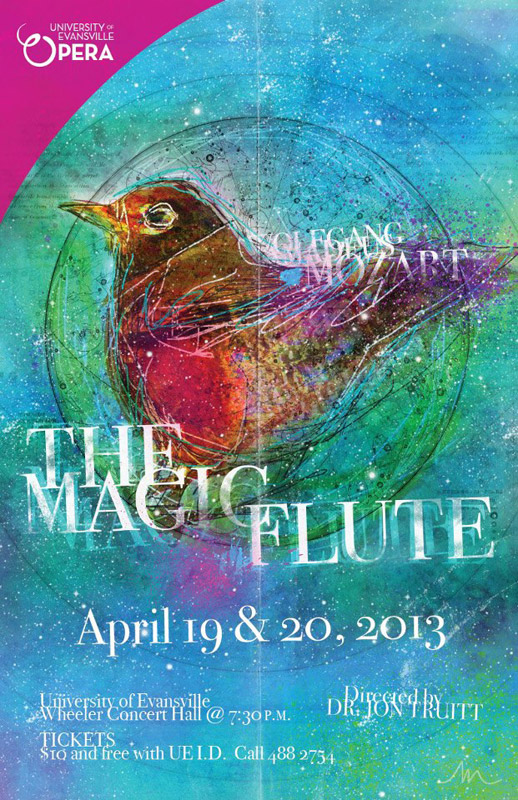