After more than 10 years leading Harlaxton College, Principal Gordon Kingsley announced today that he will retire effective July 1, 2014.  Harlaxton hosts an acclaimed study abroad program that has propelled the University of Evansville to national renown for student participation and transformed the lives of thousands of students since its inception more than 40 years ago.

Harlaxton is owned and operated by UE, and is housed in a Victorian manor in the English countryside, located one hour north of London by train. Each semester, it is home to more than 150 students from UE and other American universities, who link classroom study at Harlaxton with educational travel around the United Kingdom and Europe.

In large part due to Harlaxton, the Institute for International Education’s Open Doors report ranked the University of Evansville 12th among master’s-granting institutions for study abroad participation, with more than 50 percent of graduates studying abroad.

Kingsley has served as principal of Harlaxton College since January 2003. Previously, he was a professor of literature and religion at Tulane University, Mississippi College, the University of Louisville, and William Jewell College, all in the United States. At William Jewell, he also served as academic dean before spending 13 years as the college’s president (1980-1993). In a study funded by the Exxon Foundation, he was named among the top 5 percent of America’s most effective university leaders.

Kingsley holds degrees from Mississippi College (Bachelor of Arts), the University of Missouri (Master of Arts), and the New Orleans Theological Seminary (Bachelor of Divinity and Doctor of Theology), where his research was conducted jointly at Tulane University. He holds honorary doctorates from Mercer University, Seinan Gakuin University in Japan, and the University of Evansville. Kingsley has published three books and some 100 articles, monographs, and reviews, chiefly on popular religious subjects.

During Kingsley’s time as principal, he worked to integrate Harlaxton’s learning community to ensure that students’ classroom experiences, travels, living in a historic manor house, and connecting with local families and culture create a transformational international experience. He credits his wife, Suzanne Kingsley – who also serves as Harlaxton’s director of planning and design – for spearheading the refurbishments of student and faculty rooms and the Harlaxton staterooms, as well as coordinating fundraising efforts and long-term plans for the manor.

“Every day, for more than 10 years, I have felt among the most fortunate persons alive to have the privilege of serving at Harlaxton College,” said Kingsley. “Harlaxton is different and magical, a special place to be and to become. We hear it all the time: ‘Harlaxton changed my life.’”

“Suzanne and I will leave Harlaxton with great satisfaction in carrying out our mission here, with great joy in the privilege of serving, with appreciation to some good faculty and staff colleagues, and with inevitable sadness,” Kingsley added. “And, as the Irish/English poet W. B. Yeats said it, with ‘mighty memories.’”

“To say that UE has been fortunate to have Gordon Kingsley leading the Harlaxton program is a huge understatement,” said University of Evansville President Tom Kazee. “I’m not exaggerating when I say that Harlaxton is the best study abroad program in the world – due in significant measure to Gordon and Suzanne’s magnificent leadership. Gordon’s concern for students and their development is his compass, and their lives have been enriched not only by their time at Harlaxton, but by their association with him.”

“For the 41 years that Evansville has operated its Harlaxton College campus, Harlaxton has been characterized by a unique combination of academic excellence, administrative effectiveness, and the nurturing of an important historic perspective concerning the relationship between our two English-speaking lands,” said Lady Margaret Benton Jones, chair of the Harlaxton College Advisory Council. “Dr. Gordon Kingsley has led Harlaxton for more than a quarter of this time, inspiring students, faculty, and staff alike to achieve the very best in the Harlaxton experience.”

“Because of his outstanding success, the University of Evansville, and England itself, owes Dr. Kingsley a huge debt of gratitude,” Lady Benton Jones added.

“I never believed those people who said Harlaxton changed their lives, but now I’m one of them,” said UE student Hannah Bisch, a special education major from Kirkwood, Missouri, who spent the Spring 2013 semester at Harlaxton. “Every part of the experience contributes to this change, including the staff and administration. Dr. Kingsley continued to be as excited about Harlaxton as the students, even after his many years there. He was part of what made Harlaxton the home I couldn’t wait to return to after every weekend spent traveling.”

To name the next principal of Harlaxton College, a search committee will be appointed in the next several weeks according to established University procedures. The members of that committee will represent UE’s diverse constituencies, both in Evansville and Harlaxton. 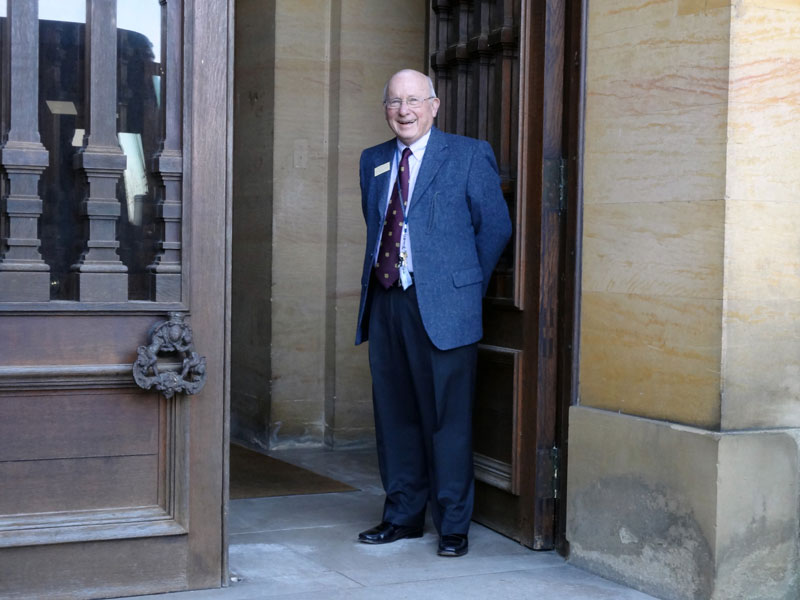