A lot of college students spend their long Christmas break relaxing and recharging for the spring semester. Not UE junior Alex Luebbehusen and his brother, Brandon, a high school senior in Ferdinand, Ind. They spent their off time creating two new Windows apps based on what Alex had just learned through a fall electrical engineering class called Small Computer Software.

Alex says he and Brandon created the first app, a fast-paced word game called Party Phrase, in just a few hours to get a feel for getting into the Windows app market.

The second one took a lot more time and work, but it is also getting a lot more notice. Late last week it was noted on the Windows App Store as a “new and rising” travel app. It is called tripp. It’s described as “a world travel organizer that enables you to map all the places you have visited. By adding notes, dates, and photos from your trips to the pinned locations, you can recapture the thrill of these unforgettable experiences and easily share them with family and friends—anytime, anywhere.”
Both apps are free. “We didn’t plan on getting rich off of this,” said Luebbehusen. “We wanted to get downloads and get people to use it. We did it for the experience.”

Mark Randall is co-instructor for the class that gave Luebbehusen the hands-on experience, and the confidence, to hit the marketplace. “It’s really neat to see somebody take something from the class and to turn something out that is being recognized. It’s a project-based class that rewards students grade-wise for adding bells and whistles above and beyond their basic assignments.”

Luebbehusen added that just the competitiveness of the class members was an incentive to adding more to the projects than required.

As for why they chose the Windows App Store for their work, he says that as a newer market,  it is not quite as crowded as others and that makes it easier to get noticed. 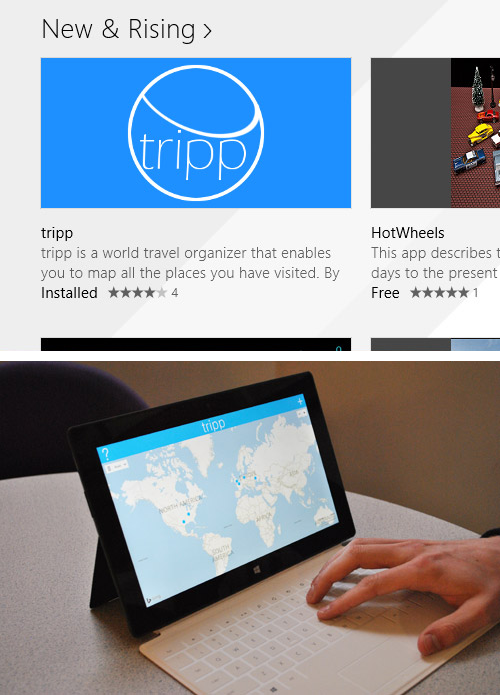