Edwin Lacy, UE professor emeritus of music, was given the Artist Award. Lacy retired from the University in 2008 but continues to teach at UE as an adjunct. He served three terms as chair of UE’s Department of Music. He began the Jazz Artist Series, helped reinvigorate the Evansville Jazz Society, and founded the UE Jazz Program and was its director for 40 years. While at UE, he received such honors as the Oramay Cluthe Eades Distinguished Professor of Music and the Dean’s Award for Excellence in Teaching. Lacy is principal bassoonist of the Evansville Philharmonic Orchestra, and a member of the Harlaxton Woodwind Quintet.

Douglas Reed, UE professor emeritus of music and organist emeritus, also received an Artist Award. Reed provides music for major UE celebrations and performs in major world cultural centers and for educational institutions and chapters of the American Guild of Organists. While at UE, Reed received the Sadelle and Sydney Berger Award for Scholarship and a Global Scholar grant for the study of global Christian song. Recently the Evansville Chapter of the American Guild of Organists honored Reed by commissioning a new work for organ and brass quintet from composer William Bolcom. In April, Reed performed the world premiere of the work with the American Brass Quintet.

Ling Lin received the Young Artist Award. Lin will begin her studies at the University of Evansville this fall. She plans to major in graphic design, with a minor in business. Lin has earned recognition as a young artist in many competitions. Her work has been displayed at the Mead Johnson District Art Show, the Evansville Museum High School Art Show, the PTA Reflections competition in Indianapolis, and in private homes. She recently won the 2015 Congressman Larry Buschon’s Indiana 8th District art competition and as a result, her painting of a riverfront skyline will hang in the US Capitol for one year.

Scott Wylie was the recipient of the Arts Advocate Award. Wylie is an adjunct instructor at UE and a member of the University’s Theatre Society and Neu Chapel Society board of directors. He is executive director of the Vanderburgh Community Foundation, which was chosen by the Indiana Arts Commission as District 10 Regional Partner primarily because of his leadership in embracing the arts. Since this designation, the number of art related applications submitted to the foundation has greatly increased. Wylie is also past president of the USI Society for Arts and Humanities and has served on the Board of Advisors of the New Harmony Gallery for Contemporary Arts.

A Special Recognition Award was also given to Cypress and related partners, which included the University of Evansville. The award was given to recognize a wide range of arts and humanities programs that focused on the heroes, survivors and victims of World War II. 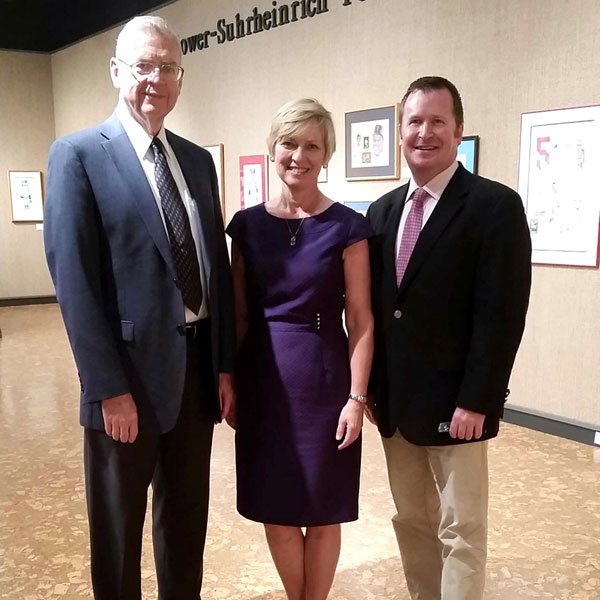