The University of Evansville has been recognized as the recipient of the 2011-12 Missouri Valley Conference All-Academic Award, which is given to the school whose student-athletes post the highest cumulative GPA.

“We are going to try to become doctors and try to become lawyers, and to be recognized by the Missouri Valley Conference as the best institution in the conference for academics is a bigger honor than any that we could receive in competition.”

Purple Aces’ student-athletes were honored at the Heritage Federal Credit Union Student-Athlete Academic Honors Breakfast on Thursday morning.  Commissioner Doug Elgin and Patty Viverito, Senior Associate Commissioner of the MVC, were on hand at the ceremony to present the award.

"This is an extraordinary honor for the University of Evansville, our athletic department, but most importantly - the student-athletes,” UE Athletics Director John Stanley said.  “We are proud of the work that each and every one of them do on a daily basis in the classroom and on the field.   This award proves what most of us have already known - that student-athletes at the University of Evansville are top notch people, students and athletes."

“I am certainly proud of John Stanley, his staff and the entire university community for seeing this become a reality for Evansville,” Elgin continued.  “It says a lot about the quality of academic here and the quality of the student-athlete experience.  I could not be happier to be here at Evansville.”

Just as impressive was the fact that 9.8% of the Aces’ student-athletes had a perfect 4.0 GPA last spring.  UE also had an extraordinary number of players garner Dean’s List honors as 118 made the dean’s list at least once last season while 61 did so for both semesters.

Senior Associate Athletics Director Sarah Solinsky, who oversees academic and student services for student-athletes was also proud of the award.

“We are extremely proud of our student-athletes and their ability to compete in the classroom in addition to their respective sports,” Solinsky said.  “This award is shared with our faculty, academic support services, and coaches who are all vital in the student-athlete experience at UE.”

Several Aces teams were honored throughout the year for their academic performance.  The women’s swimming team posted a combined GPA of 3.56, which tied for the fifth-highest at the Division I level while the men’s team (3.10) tied for 30th.

With a 3.416 GPA, the UE men’s golf team earned its second-consecutive GCAA honor, which just 79 D-I teams received.  Seniors Michael Sainz and Griffin Wood were named Cleveland Golf/Srixon All-America Scholars for their performances on the course and in the classroom.

Another who received an individual honor was men’s basketball player Colt Ryan.  Ryan became the second UE player to be named as the MVC Scholar Athlete of the Year in 2012.  Ryan had a 3.31 GPA while averaging 20.5 points per game in his junior campaign.

The UE volleyball team tallied a 3.618 GPA en route to AVCA team honors.  It marked the eighth time in the last nine seasons that the team received those honors.  As a freshman, Ashley Ring finished with a 3.971 GPA as an exercise science major.  In cross country, both the men’s and women’s teams earned the USTFCCCA All-Academic Award.  It is given to teams whose GPA is 3.0 or higher with five team members competing in their respective regional championships.  The women were 8th in the nation with a 3.65 while the men were 25th with a 3.41.

For the 17th-consecutive year, the Aces women’s tennis team garnered ITA honors.  To be eligible, teams must have a combined GPA of 3.20 or higher with all players on the roster contributing to that total.  On the individual side, five players were honored as ITA Scholar-Athletes.  To be named one, a player must be a sophomore in academic standing while being a varsity letterwinner and having a GPA of 3.50 or higher.

Swimmer Colin Gray notched a perfect 4.0 in mathematics and was chosen as a member of the First Team Academic All-America Team.  As a side note, the men’s swimming GPA’s did not factor into the MVC award since they compete in a separate conference.

The MVC All-Academic Award is in its tenth year of existence and is awarded to the school whose student-athletes combine for the highest GPA.  The GPA totals include all student-athletes who compete, practice or receive athletic aid during the academic year. 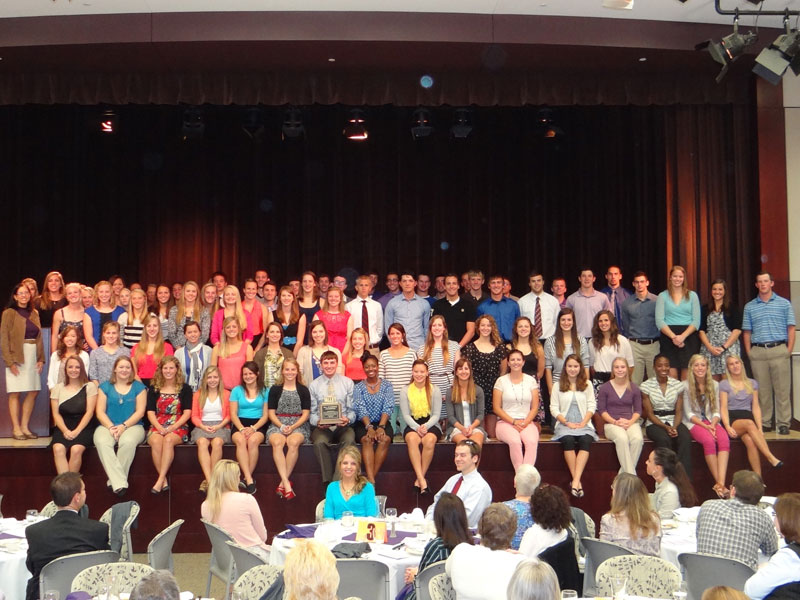