Each year, the Alumni Association recognizes the outstanding service and accomplishments of its members. The 2020 Alumni Awards Celebration was cancelled due to the Coronavirus pandemic. We will recognize our 2021 award winners in April 2022 at a special award ceremony for the winners, their guests, and the UE Alumni Association Board of Directors. We are currently accepting nominations for the 2022 Alumni Awards Celebration. Nominations are due by June 30.

Recognizes an individual (or couple) for distinction in their profession and service to their community and UE. It is the highest honor the University of Evansville Alumni Association can bestow.

In 1998, The University of Evansville Alumni Association Board of Directors established the Edie Bates Volunteer Service Award. The award recognized Edie Bates exceptional volunteerism within the University alumni community. This award is given each year to volunteers who show the same selfless dedication that Edie Bates displayed through her service to others and to the University.

As mayor of Evansville since 2012, Lloyd Winnecke has led tremendous change in the Evansville community. His leadership has seen the completion of large scale, transformative projects such as the Double Tree by Hilton Hotel in downtown Evansville, which connects to the Ford Center and the Old National Events Plaza by skybridge. He also was instrumental in the city building the Stone Family Center for Health Sciences, a collaborative partnership bringing together University of Evansville, Indiana University School of Medicine, and University of Southern Indiana in training a next generation of health professionals.

Winnecke has led a great number of other initiatives, including attaining Regional City status, negotiating an extended lease agreement to keep LST 325, the historic warship, in Evansville for an additional 10 years, and championing the efforts of UE’s Changemaker Challenge as a panel judge.

Winnecke has devoted his time, energy, and passion to promoting positive progress in the City of Evansville. 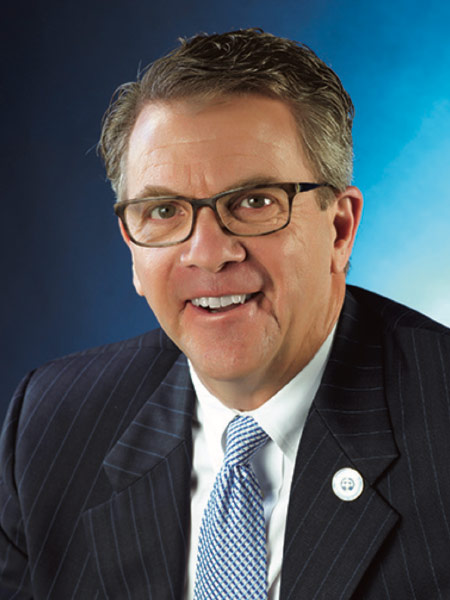 William Bell was a longtime educator in the Evansville Public School system. Due to the nature of racist policies that existed in the United States, segregated schools existed and Bell became an educator teaching primarily black students during his tenure. He was a long-time instructor at Lincoln High School in Evansville where primarily black students attended for years. Although doors were closed to him in the areas of music and education, he continued to dedicate his career to educating Lincoln High students to achieve all they could in life and to build themselves a path to success.

As an Evansville College student in the 1940s, Bell became a campus leader and was involved in Evansville College organizations. As a black student he led the all-white Glee Club, and he was one of the first black students to achieve campus notoriety based on his educational performance in the classroom. His achievements under trying social circumstances speak to the excellence of his character and dedication to his alma mater. 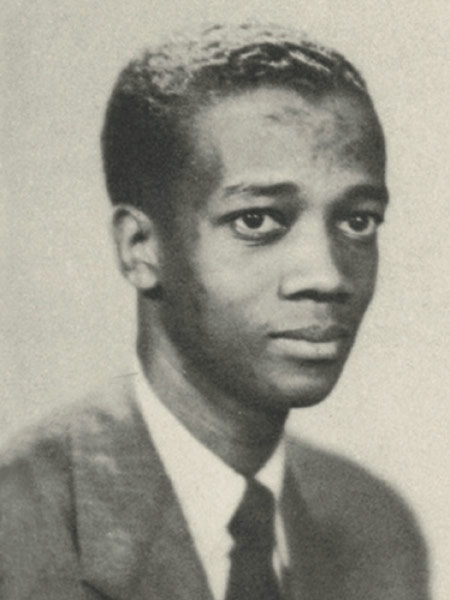 After a year-long run as Sandra in Broadway’s smash-hit production of The Play That Goes Wrong, Amelia McClain returned to UE as a guest artist in residence for the 2018-19 academic year, teaching acting and audition techniques. An accomplished actor, she has worked on Broadway, off-Broadway, and in regional theatres across the country.

Wes Grantom’s professional credits include the world premiere of Civics and Humanities for Non- Majors, The Lion in Winter, and A Comedy of Tenors at Pioneer Theatre Company; Eager to Lose, by Matthew-Lee Erlbach, at Ars Nova; The Steadfast, by Mat Smart ’01, and Mine, by Bekah Brunstetter, for Slant Theatre Project. He has a number of Broadway credits as resident and associate director and is a recipient of multiple Drama League Fellowships, a member of Lincoln Center Theater Directors Lab, and the artistic director of Crowded Outlet based in Queens, New York. Grantom served as a guest artist for UE Theatre in the 2018-19 season and directed Spring Awakening. He also directed Once in a Lifetime for UE Theatre in 2012 and returned to UE in 2019-20 as resident director.

Grantom has worked with and hired countless alumni whose graduation years span decades. 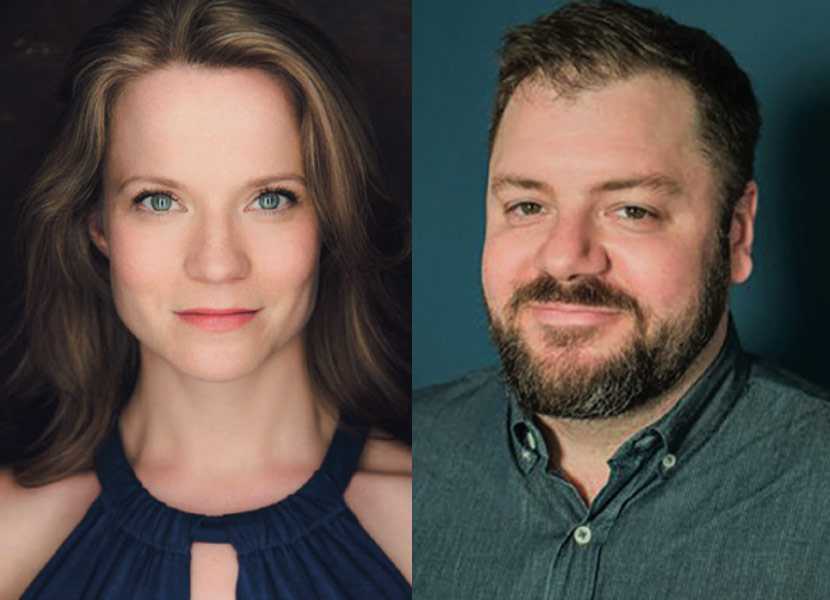 Brad Coomer is an avid volunteer for the University of Evansville. He has served as champion for the Indianapolis UE Alumni Network, an alumni mentor for UE students as part of the UE Connect Program, a member of the Hyde Hall Fundraising Committee, a seven-year member of the Alumni Association Board of Directors and former president, and is currently serving as an alumni-elected member of the Board of Trustees. Coomer is also a leader in UE philanthropy. Through his generous support of the True and Loyal Fund, he is a current member of the University’s President’s Club and was a lead donor for the Hyde Hall Renovation project.

Coomer’s established career has taken him from his first job at Babcok & Wilcox in Mt. Vernon, Indiana, to One-America in Indianapolis, and now to John Hancock where he currently serves as Vice President, Strategic Relationship Management. 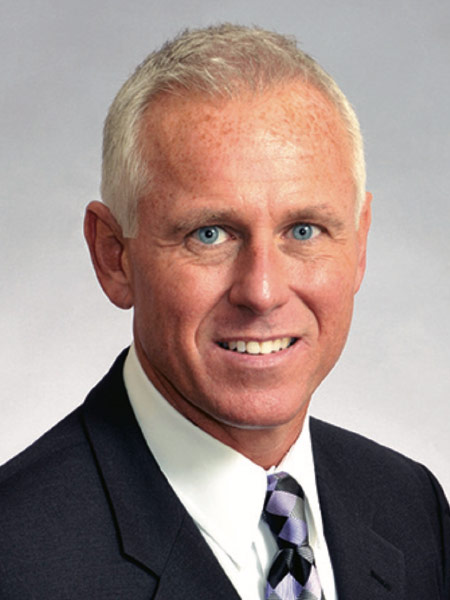 Since 1967, Robert L. Bowen, PhD, has distinguished himself in the construction industry as the founder and chair of Indianapolis-based Bowen Engineering Corporation.

Bob’s generosity has impacted scores of engineering students and graduates at the University of Evansville. Bowen Engineering has hired numerous civil engineering and mechanical engineering students as summer interns, giving these students the opportunity to work on exciting state-of-the-art construction projects such as the IPL Petersburg station and the Duke Energy Gibson station.

Bob established the Bowen Engineering Corporation Endowed Dean’s Discretionary Fund at UE in 2005. Funds have been used to support a variety of student projects, including the ASCE Concrete Canoe Team and many others.

In 2011, Bob received an Honorary Doctorate of Business Administration from UE and recently joined the Board of Trustees as an Honorary Member. 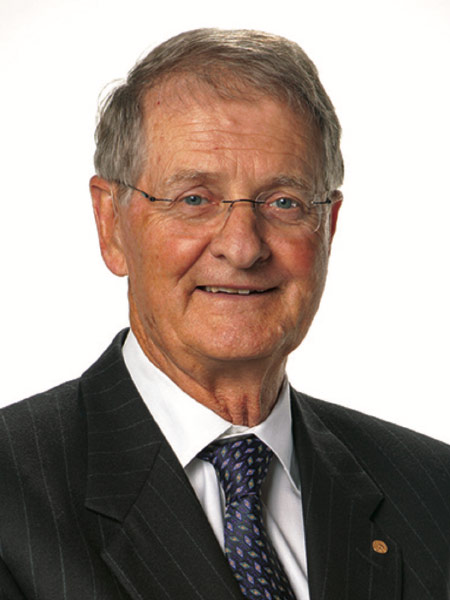 Angela Williams was a mother, author, and mentor, and the University of Evansville is proud to have had her as an employee from 2007-2017. She worked in the Office of Alumni and Parent Relations during her 10 years at UE, most recently serving as assistant director of alumni and parent relations at the time of her unexpected passing in February 2017 at the age of 57. Prior to her time at UE, Angela earned her Bachelor of Science degree in operations management from LaSalle University and an MBA from the University of Pittsburgh with concentrations in finance and marketing. As assistant director, Angela was instrumental in the creation of the UE African American Alumni Association, developing a photographic presentation of the history of black students at UE, a chronological list of African American student achievements, and the UEAAA alumni awards.

Angela’s dedication to service to UE through a variety of activities and actions displayed continued support for the University, students, parents, and alumni. 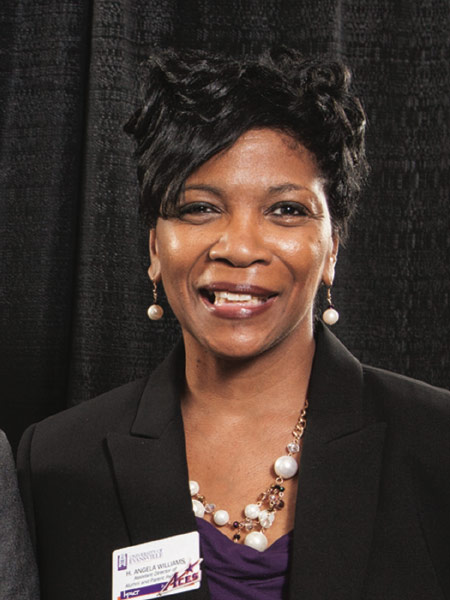