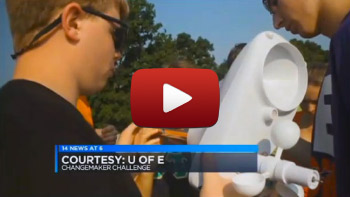 The top finishers of the Institute for Global Enterprise’s annual Changemaker Challenge Competition for students at the University of Evansville have been announced. The winners were awarded a total of $3,500 to help make their ideas a reality. Judges from the community, including City of Evansville mayor Lloyd Winnecke, evaluated the students at the event, which recently took place at UE. The theme was “Evansville Strong: Local to Global.”

Team Feel Fit won first place and received $2,000. The team aims to promote a healthier lifestyle for the Evansville community to combat one of the city's biggest issue: obesity. Their goal is to provide outdoor gyms in parks or recreation centers for everyone to use without cost, to inspire people to adopt a healthier lifestyle. This will reduce the number of people who suffer from obesity and diseases caused by obesity. Student team members: Willian Mallmann, Monica Morales, and Gabriela Tom.

Team Evolving Evansville Energy won second place and received $1,000. The team’s goal is to create an environmental awareness campaign, starting on UE’s campus. They will host campus activities that identify ways students can decrease energy use, and create energy. The team will place bikes around campus where students can charge their phones. As part of a larger alternative energy GAP project, the team recently installed a weather station on the roof of Koch Center for Engineering and Science and have started collecting data. They will meter buildings before, during and after the campaign to determine the effects. They will create a student consulting service to help local homes and businesses reduce their environmental impact. They are working with Carver Community Center to obtain solar panels to reduce energy bills, and plan to self-power the historic William Wesley Peters’ Usonian House that will be placed on campus. Student team members: Spencer Willem, Alyssa Murphy, Tyler Thompson, Seong-woo Song, Andrea Onyett, and Tyler Wintermute.

Team #eNOugh won third place and received $500. The mission of this team’s project is to prevent mental, physical and emotional abuse of students in grades 6-12 in Vanderburgh County by empowering them through education and confidence building. They will work with the Boys and Girls Clubs (BGC) to create an app that gives students a safe place to go to access support for bullying or domestic violence. They will create materials for the students and pass them out at BGC meetings. Student team members: Mackenzie Harris, Jessie Earle, Megan Fetterman, Rachael Cundiff, Austin Key, Jamie Settlemyer, and Mary Whelan.

The Changemaker Challenge is dedicated to launching the world’s next wave of social entrepreneurs and innovators. It encourages the best and brightest UE students to compete in teams to solve the planet’s biggest challenges with innovative ideas for sustainable solutions and enterprises.

“The Changemaker Challenge is a great way to motivate young adults to become more engaged in the community while challenging them to dream large and pursue dynamic ideas that may become a catalyst for great change in our city,” says Mayor Winnecke, one of the competition’s judges.

For more information, visit www.evansville.edu/globalenterprise/cc.cfm or e-mail globalindiana@evansville.edu, or call 812-488-2455.