Joe is the Keyboard Lab teacher at Highland Elementary School in Evansville, IN. He also teaches guitar and piano lessons, engages in freelance playing for weddings and other gigs, plays in rock bands, and composes music for projects such as independent movies. Spending so much time on stage, it's no surprise that Joe met his wife, Alaxandra when she became a vocalist in a band he played for in high school.

Though he loves to perform, Joe knew he didn't want to go through the sacrifices and pressures that a professional musician experiences. He discovered in high school that teaching guitar lessons was rewarding. Joe enjoyed watching his students become excited about learning a new instrument, so he decided to go to the University of Evansville to major in music education. Starting as early as his freshman year, Joe had the opportunity to experience internships across several different educational settings to get a true taste of what really happens in the classroom. He also was also able to study in three different private studios one for piano, guitar, and organ. In these studios, with the professors he studied under, Joe stated that his growth in playing these instruments was beyond anything he could have ever expected.

Being a part of a small music department was one of Joe's favorite parts of the UE experience. Because of the size of the school he had many opportunities that he doesn't feel he would have in other larger departments. He was able to work in UE's Neu Chapel as a musician, play in the jazz band, and accompany many students. He also feels that he received more individualized attention from his professors because of the department's size.

Now, as a music educator, Joe enjoys the contagious enthusiasm that music can bring to a group of students. One proud moment of unity and enthusiasm through music was when his school performed “The Lion King, Jr.” The cast was 160 students from many walks of life with various abilities, and by the end they were all singing memorized harmonies in a foreign language “like pros.” Whether it's a large group of students performing a show, or just one student falling in love with an instrument for the first time, Joe knows he picked a fulfilling career. 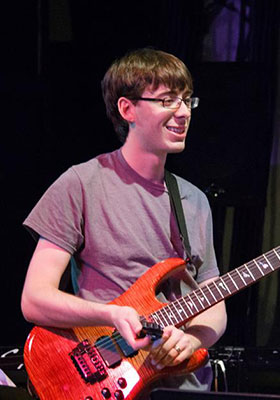