Originally from Omaha, Nebraska, Tad attributes a portion of his passion for music to his high school band director, Doug Johnson of Creighton Prep in Omaha. Johnson inspired Tad to pursue music as a career to encourage students with positive music experiences, as he experienced under the direction of Johnson. Tad chose to obtain his degree in music education at the University of Evansville. Upon completion of the degree Tad “felt extremely well-prepared as a music educator. The numerous performance opportunities helped me grow as a musician, and the course work helped me develop a greater understanding of music theory, literature, and history. For the education courses, I appreciated spending time in schools every semester observing teachers and working with students.”

Tad describes his experience at UE as “excellent,” noting the benefit of the small class sizes and one-on-one attention from the professors. As far as handling the transition from Omaha to Evansville, Tad quickly realized between studying, ensemble rehearsals, practicing, and engaging in social activities that there was not a loss for things to do or ways to get involved. Now, as a husband and a father of three children, Tad appreciates Evansville for being a great place to raise a family.

Since graduation, Tad has earned a master’s degree in education from Indiana Wesleyan University, a graduate certificate in Catholic School Leadership from Creighton, and an educational specialist degree from Indiana State University. He completed his PhD in 2013 from Indiana State. Tad has served as president of Mater Dei High School (Evansville, Indiana) since July 2010, principal of Mater Dei from 2007-10, and as music teacher at Mater Dei and Kokomo High School. He has taught graduate courses in education and leadership at Creighton University, University of Southern Indiana, and University of Phoenix. In his spare time he enjoys spending time with his family, singing, playing the guitar, and playing the bagpipes. One of his proudest career moments was in 2006 when he, “was able to lead the [Mater Dei] marching band to their first appearance at State Finals in school history. They became the smallest band to ever qualify for State with only nine wind players and five percussionists. It was incredibly gratifying to see the hard work of the students get recognized with this major accomplishment. Since 2006, the band has qualified for State nine times.” 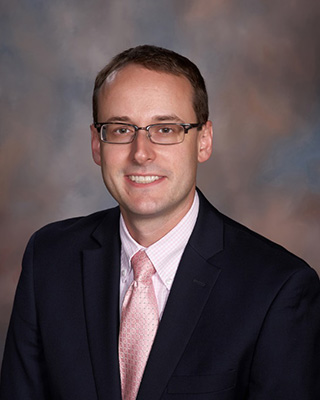