As a Bandsmen in the United States Army, Tiffany states that music is her life. Music has made her humble and grateful for many things. As a part of her career she has the honor of playing for our troops when they return from deployments, and is able to honor the fallen by playing “Taps.” Every morning when she wakes up she is thankful for this career, and she knows she has picked the right job for herself.

Starting on the trumpet in the 6th grade, despite her parent's persuasion for her to play the flute, Tiffany's love of music blossomed. Her passion for music led her to studying the trumpet at the University of Evansville. During her time at UE she realized that she wanted to play beyond college and obtained a Master of Music in Trumpet Performance from Louisiana State University in 2008. At the University of Evansville she appreciated the student to teacher ratio and the closeness of the students. She enjoyed the small department of music as it allowed her to perform in several ensembles. And, though she currently performs every day, she is thankful for her degree in music education. Tiffany's experience at UE gave her a lot of one-on-one time with professors and made it easy to learn differently playing and teaching technique, which have proven to be valuable tools as she now is in charge of a brass quintet.

Among her many performances, a stand out moment to Tiffany was playing in the unit's jazz orchestra with Jens Lindemann as the guest artist. Watching him perform and how he entertained the audience made her proud to be a part of the experience. What originally was planned to be one enlistment, lasting three years, has turned into a career in the Army Band Program. She plans to remain in the program until retirement. Not only has this career given her multiple performance opportunities, excellent physical stamina which has tremendously helped in performance, but on a Naval Base in Norfolk, VA is where Tiffany met her husband, Nic. Nic is a Marine horn player and together they have two amazing children, and a dog named Bruiser. Tiffany enjoys spending time with her family, running, reading, and crocheting. 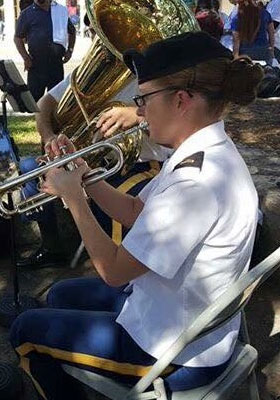