“Music is the vehicle/tool I use to teach and encourage children and parents to become fine human beings who bring beauty into the world,” Colleen reflected when asked how music has influenced her career. Colleen is the Executive Director of the Barcel Suzuki String Academy (BSSA) in Wauwatosa, WI. She feels fortunate to have had the opportunity to teach some of her students from the time they were four years old until they graduated from high school during her 20 year tenure at BSSA. She has achieved much in her career including being chosen through an international audition to perform on the International Ensembles Concert at the Suzuki Association of Americas Conference. She states that the accomplishment was a genuine honor and a dream come true.

Introduced to violin at a young age, not only was Colleen a Suzuki student herself, but her mother was a Suzuki teacher and co-founded BSSA. Growing up watching her mother teach, she loved playing school and eventually realized that she, too, wanted to teach. Attending the University of Evansville was a logical step in her education as at the time UE was the only program in the United States that offered her specific major with a Suzuki Emphasis as an undergraduate degree. Obtaining this degree allowed her to immediately begin carrying out her passion to teach the Suzuki philosophy after graduating.

Colleen cherishes her time at UE citing that being a part of a small music department where everyone knew her name was incredible. She made lifelong friends, many with whom she is still in contact. She feels fortunate to have studied violin with Professor Carol Dallinger noting to this day that Professor Dallinger is someone she can count on for advice. Another stand out quality of UE was that Colleen had the opportunity to study abroad for a semester at Harlaxton College in Grantham, England. Other than the amazing academic and travel abroad experiences, Colleen enjoyed how strongly the community supports UE and the arts. She experienced the support Evansville has for the arts first hand as an Evansville Philharmonic fellowship recipient. This also allowed her the opportunity to play in the EPO for four years.

Of the many roles she has played, her current favorite is being “Aunt Colleen” to her 3 year-old goddaughter and niece. 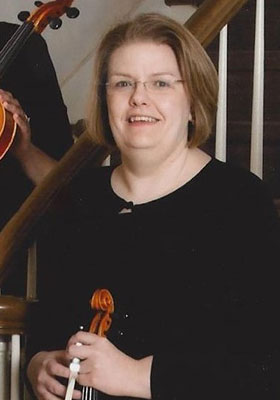