Nick has worked with The Florida Orchestra for four years in various capacities, but currently works in the finance department responsible for accounting and budgeting. A native of Evansville, Nick actually attended high school on the same street as the University of Evansville. Yet, during his time at UE Nick found that he was encouraged to look outside of the bubble of his comfort zone and toward the rest of the world.

Aware that performance would not be a choice career for him, Nick determined he would seek a career in music management. While at UE Nick participated in a variety of ensembles, and feels this experience provided him with a unique perspective on the discipline and dedication it take to be a performing artist. He sees extreme value in music recognizing that music can reinforce relationships, influence situations, and is an integral part of life even when people are unaware of the music by which they are being influenced. Being cognizant of the power in the “invisible” aspect of daily life, that is music, Nick finds gratitude in knowing that all of his colleagues at The Florida Orchestra see the value in promoting live music.

Reflecting on his career at UE Nick states, “When I look back on who I was as a student, I am able to see the growth of my comfort zone. Because of my comfort zone expansion, I have taken bigger risks in my career and developed skills I would not have imagined as a student.” Nick mentioned that the relationship he has with his professors and peers in the music department was one of the most important aspects in preparing him for his career.

In his free time, Nick and his wife Erin, also a UE music department alumni, enjoy spending time at the beach. Nick also is an avid listener of podcasts, spends time golfing, running, and playing Frisbee. 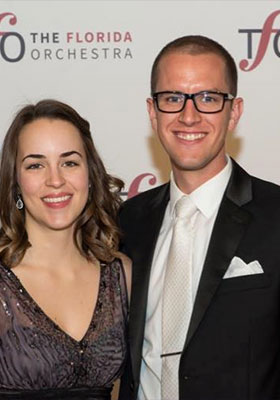