Active in presenting research at the American Music Therapy Association regional and national conferences, Fatima feels that the University of Evansville prepared her for a career in music therapy educationally, in clinical proficiency, and also personally. The UE experience offered her a firm foundation that she built upon by earning a master's degree in music education with an emphasis in music therapy from the University of Kansas. Fatima's areas of research include anxiety alleviation, clinical supervision with international music therapy students, and child development.

Currently Fatima is employed as a music therapist in the Evansville area working with individuals with Autism Spectrum Disorder and developmental disabilities. While she initially searched for a position within a hospital setting, she states that her current position “provides unlimited opportunities far beyond what I would have imagined.” She now views Evansville as her “home away from home” as it offers her a sense of belonging. One of Fatima's favorite parts of the University of Evansville is the people, stating “their kindness, friendliness, and enthusiasm for their work are a great motivation.”

Beginning violin performance as a toddler, Fatima first realized the powerful therapeutic benefits of music through performance. Many years of intensive training, rehearsals, and performances provided dedication and passion along with a sincerity and professionalism that were fostered during her time at UE. These characteristics ended up being critical elements that made Fatima successful in her career as a music therapist. 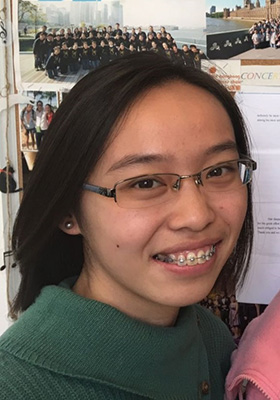